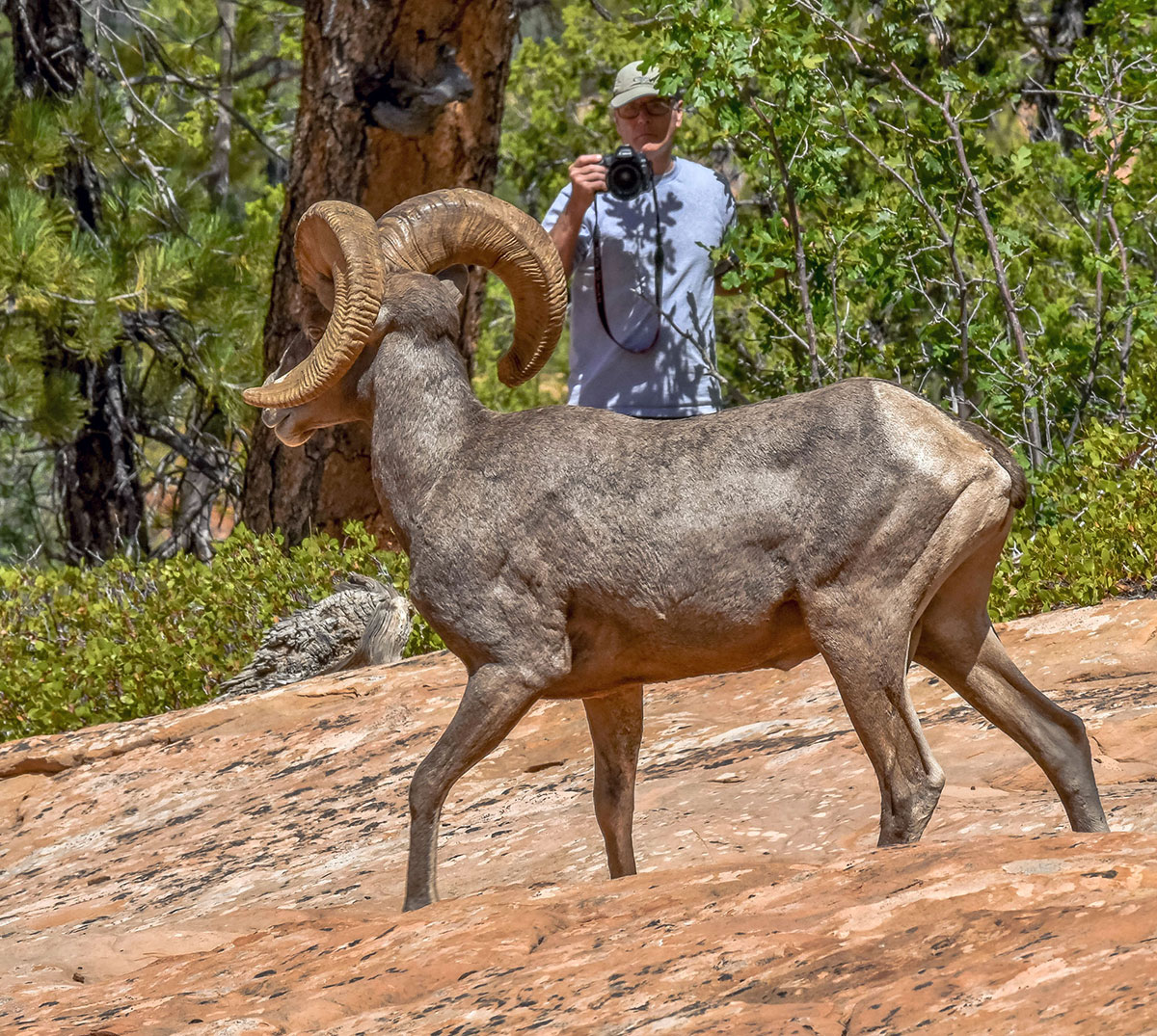 One warm afternoon I found myself with a few rare carefree hours of time in Utah’s Zion National Park, on the upper east side. I spotted a large ram bighorn sheep moving eastward along a rock ledge at the base of some larger formations. I decided to see where he was headed so I followed along for about 1/2 mile. He soon came across two female bighorn sheep (ewes) and then proceeded to lead them in the same easterly direction along the face of a series of formations that were frequently interspersed with side-canyons.

The bighorns turned into a particular side canyon and ascended upward into the mouth of the canyon where it was beginning to narrow. There was a large sandstone slope within this canyon that was covered with foliage on which the bighorns like to feed. Across the face of this area, I could see the horns and sometimes the bodies of 15-20 more bighorn sheep.

It seemed the herd was gathering for a purpose, and I knew that the purpose was likely The Rut (mating time). I realized that if I were to continue walking, I would only push them all further up the canyon, or possibly straight up the cliff face. I had seen these animals easily ascend and descend nearly vertical rock buttresses many times before. 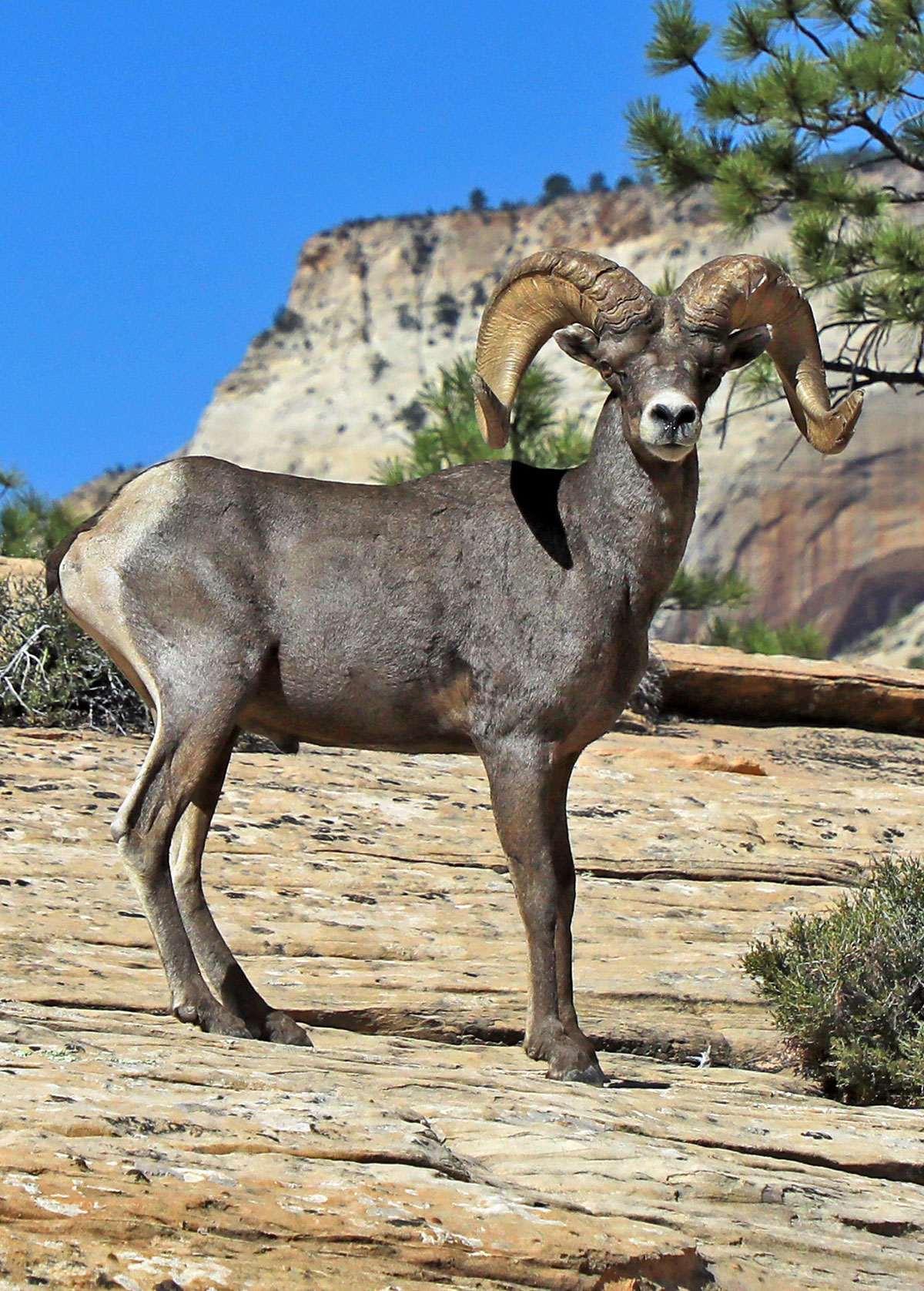 Patiently I found a shady spot under a tree where I could observe these animals. I could see the males showing blind interest in the females. I knew I would be waiting for a while so I stretched out on the rough sandstone, as comfortably as I could, and took in the blue sky, the white billowy clouds passing overhead – their shadows playing on the rocks, and the rough contours of these Zion National Park red-stained sandstone bulwark structures.

Air temperatures were perfect and my only distraction from the grand setting was the roughness of the rock strata pressing into my back. For approximately one and a half hours I intermittently rested and then moved 20-30 yards closer to the bighorn herd, keeping an eye on them as they occasionally looked up from their feeding to see if I was posing any threat. It seemed to me that they were getting more comfortable with my presence. 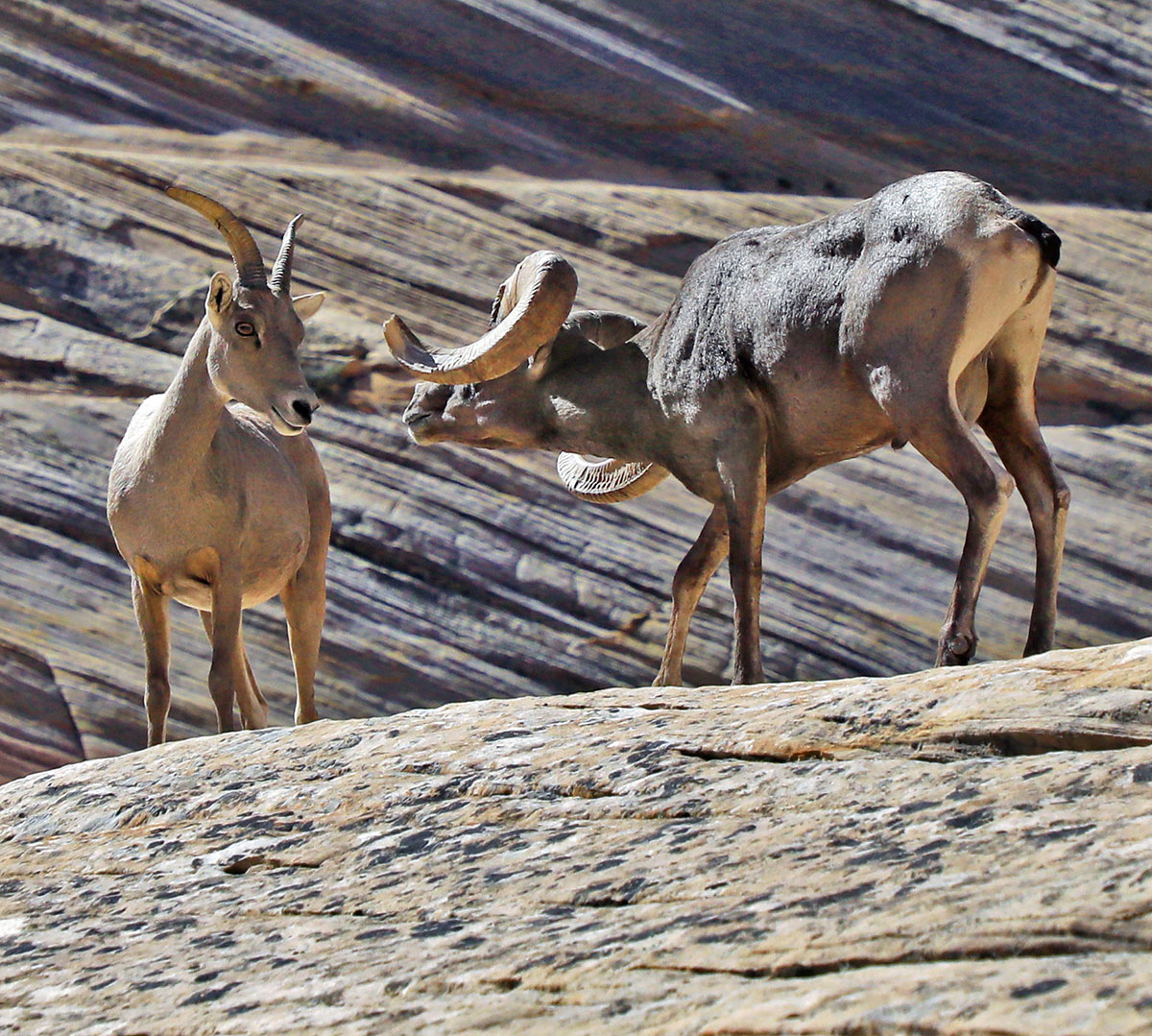 Somehow during this process, I was able to get a phone call out to Bob who was in meetings in Kanab and planned to join me soon. I encouraged him to end his meetings and come to my location in Zion National Park as soon as possible. Forty-five minutes later I left my spot and found Bob near the main canyon road.

Together we circled quietly behind foliage until ascended a sandy hill that visibly obscured our approach. The heads of male and female bighorn sheep rose up from their foraging as Bob and I crested the dune. We were now within 40 yards of many of the bighorns but it seemed my earlier hours of invested patience were paying off, as they simply went back to foraging. 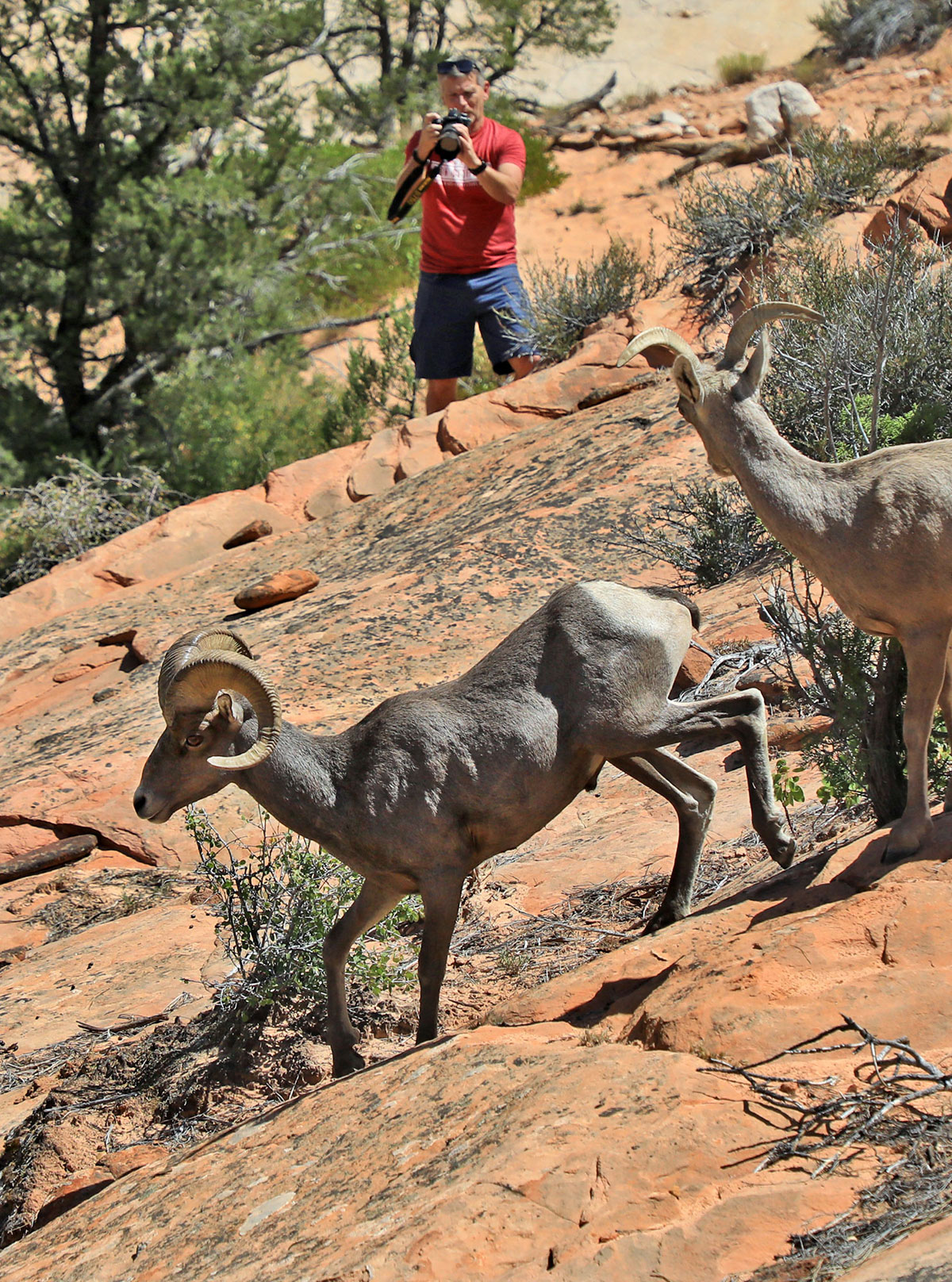 From Seclusion To Acceptance

For a time, we stood behind large ponderosa pines, scrub oak, and other foliage, so as not to alarm the animals, but soon we were able to stand out in the open as if we were part of the herd. It was obvious that the desert bighorn rams were oblivious to anything except the thoughts stirred up during the rut, and that the females were distracted by the males, so it was as if Bob and I were of no consequence.

We spent the better part of an hour in this quiet side canyon in Utah’s Zion National Park shooting photos in close proximity to these magnificent animals. 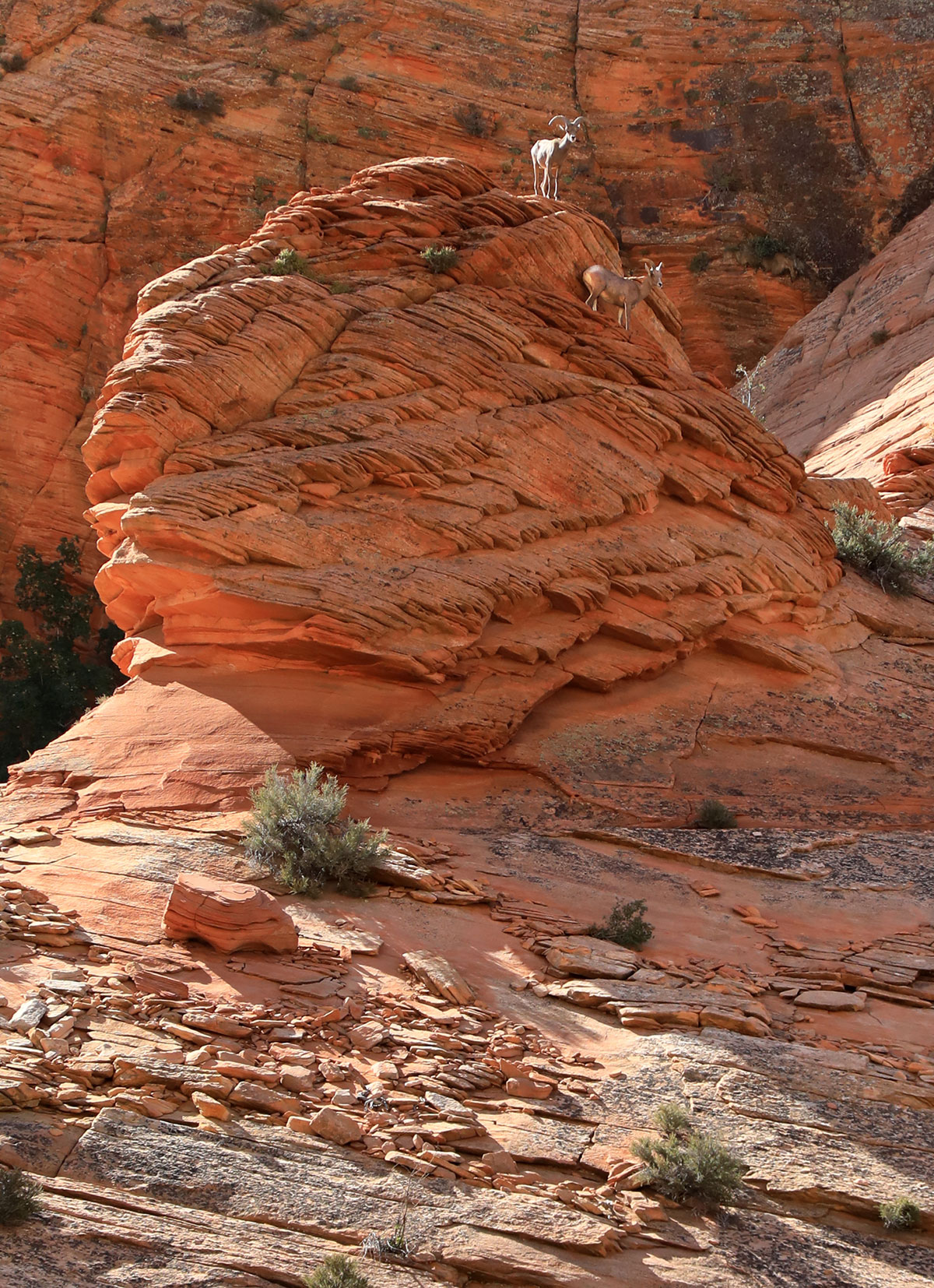 Time To Be Moving On

At length we realized that we should both be on our way to our independent work commitments.  For a few hours it seemed that all of nature allowed us to experience a remarkable experience in Zion National Park with bighorn sheep.  It was a setting that was rare, and quite unforgettable. 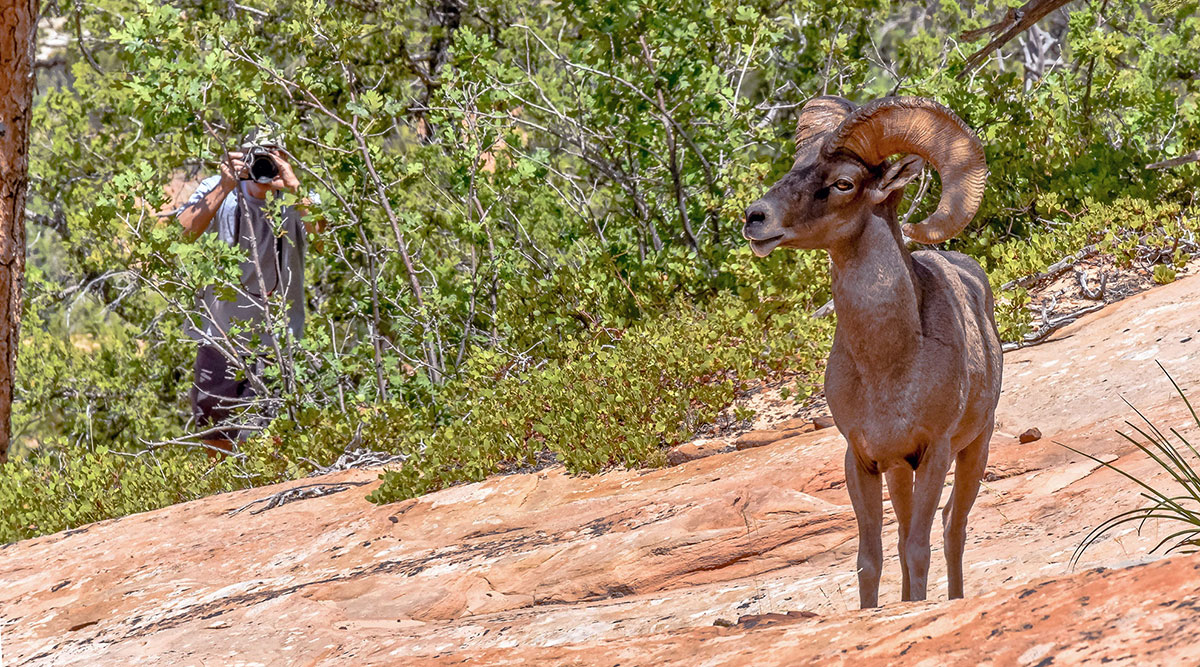 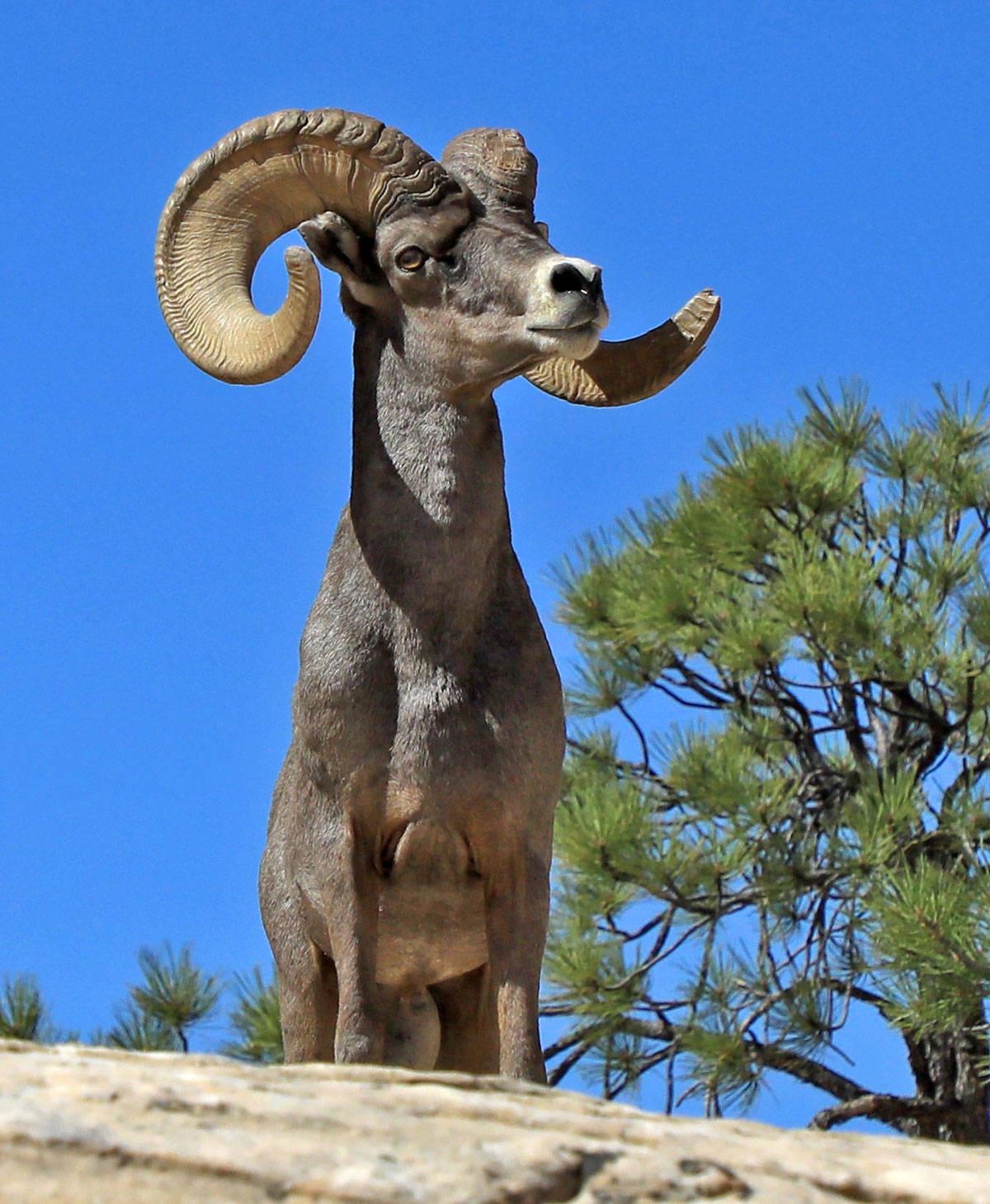 Utah’s Zion National Park is one of five total national parks in Utah that are referred to as Utah’s Mighty Five.  These parks are in relatively close proximity to each other, and much closer together than found in states such as Alaska or California which are two other states with at least five national parks.

Yellowstone National Park’s south loop will reopen to the public on June ...
Scroll to top