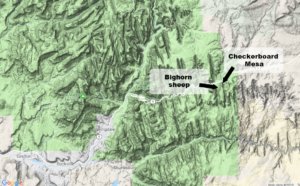 The desert bighorn sheep are in rut from July to October, which means there’s some serious head butting going on in the park during this time. We see bighorn quite often at Zion National Park along the side of the road and clinging to the craggy cliffs on the east side of the park, but rarely do we see them in rut. We knew now would be our opportunity.

Zion National Park is a great place to watch wildlife. You can often see mule deer, desert bighorn sheep, wild turkeys, rock squirrels, turkey vultures, and several other species of birds including the endangered California Condor from the classic trails and roads in the main sections of the park. During the bighorn rut, if you’re lucky, you’ll see rams clashing heads and chasing ewes. This is the time when rams battle for the mating dominance. You might also see bighorns with collars and ewes with lambs. They cross the roads frequently, so keep an eye out for them as you’re driving.

East Side is the Best Side

The best place to look for desert bighorn sheep in Zion is on the east side of the park between the Zion Tunnel and the east entrance particularly between the second tunnel and Checkerboard Mesa. This section is where they can often be seen on the side of the road and climbing in the craggy cliffs.

On this particular day Mark spotted a ram foraging on the side the of road and tracked it east for a half mile into a ravine west of Checkerboard Mesa called Fat Man’s Misery. I joined Mark after calling me to let me know that he found an active herd and that I should meet him there. Together we hiked up the canyon to where we found a small herd with several rams. We didn’t luck out with any displays of head butting, but we did see plenty of rams giving chase. We were able to observe them for quite some time and within just a short distance. It was an epic day of wildlife viewing and photography, much better than what we had hoped for and one we’ll long remember.

The rams didn’t pay any attention to us, they had only one thing in mind.