You are here: Home1 / Road Trips2 / One Tank Trips of the Week3 / Mesa Verde and Hovenweep

Mesa Verde and Hovenweep – Trail of the Ancients 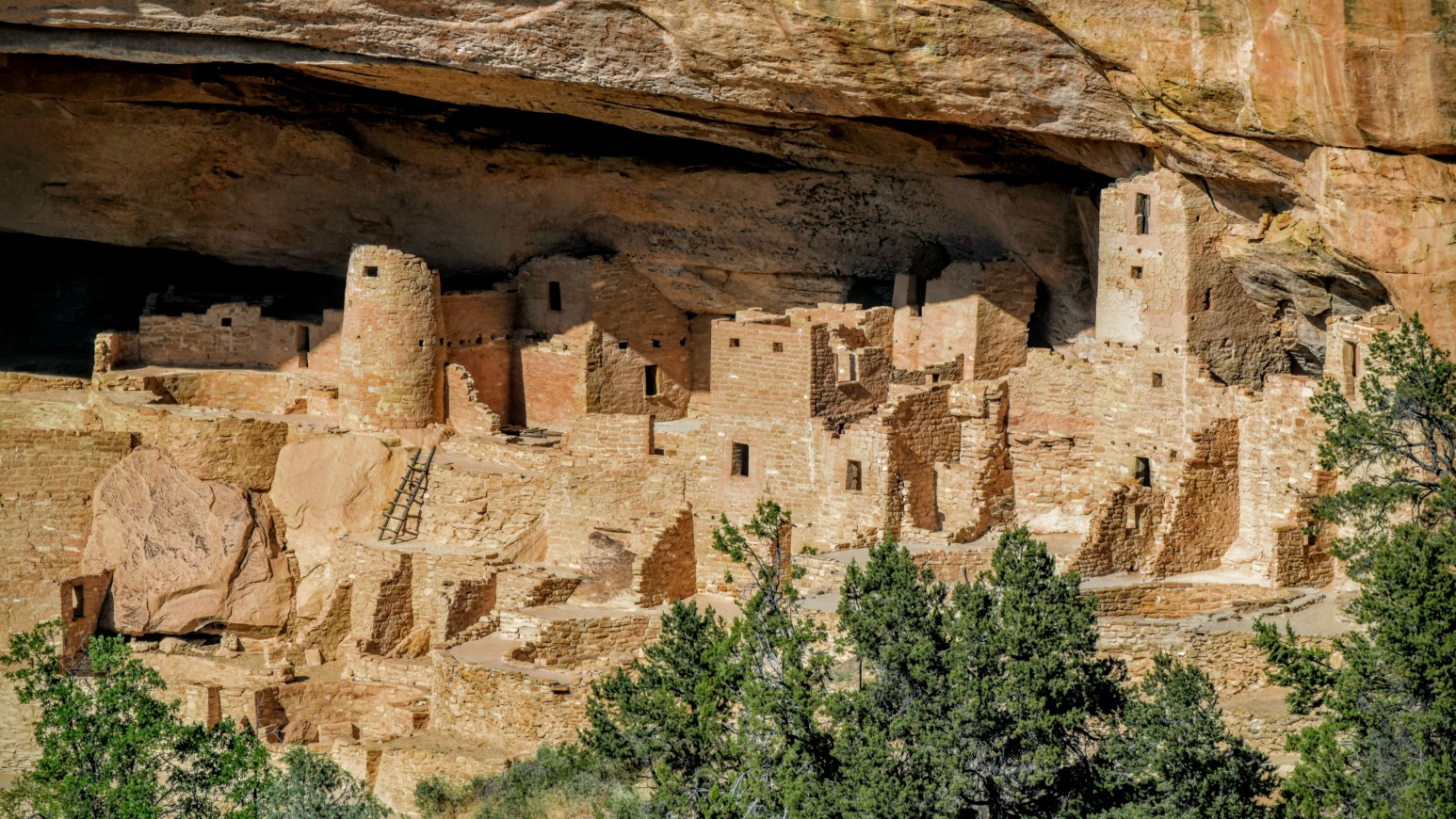 Located in southwestern section of Colorado or what is known as the Four Corners Region, Mesa Verde is home to North America’s largest cliff dwellings inhabited more than seven centuries ago.

Situated on a plateau high above Montezuma Valley between Cortez and Mancos Colorado, Mesa Verde was once home to ancient indigenous people known today as Ancestral Puebloans or ancestors of today’s Pueblo people. They lived in this region from around 550 AD to 1,300 AD with the belief that years of drought and depletion of resources were the cause of their exit to places farther south including Chaco Canyon.

The main attractions of Mesa Verde are the cliff dwellings with Cliff Palace, the largest of the group being the main star. Other dwellings worth visiting are nearby Balcony House, and Spruce Treehouse all on Chapin Mesa. Another large dwelling is Long House located on Wetherill Mesa that’s approximately 20 miles from Cliff Palace.

Not all dwellings are open and rarely, it seems these days, that all are open in the same season. Spruce Treehouse has been closed since 2015 due to a rock fall from above the ruins. It remains closed due to instability. However, you can view the dwelling from the back deck of the park headquarters and from a trail that leads visitors to a favorable viewing area. Prior to the rock fall visitors were allowed to walk through the dwelling and even climb down into a Kiva – “A kiva is a space used by Puebloans for rites and political meetings, many of them associated with the kachina belief system. Among the modern Hopi and most other Pueblo people, kivas are a large room that is circular and underground, and are used for spiritual ceremonies. Wikipedia.”

Cliff Palace, Balcony House, and Long House are ranger lead guided tours that require a reservation and have a fee that’s around $11 – adult. All these ranger lead tours require climbing steps and ladders with some exposure in high places. Balcony House also includes crawling through a tight 12 ft crawl space that about two feet in diameter.

The Cliff Place loop road is closed until mid-July 2022, which means Cliff Palace and Balcony House will not be available until later in the summer. You can still get a good view of Cliff Palace from Sun Point and from the Sun Temple across a narrow canyon. (see map)

Pit houses are located throughout the loop roads on the mesas.  Pit houses were on top of the mesa and were the main habitations prior to the inhabitants moving to the cliff dwellings below in the waning years of their lives in this area. Speculation is that they moved below mostly for protection from weather, heat, and cold. Our favorites are Far View House and Coyote Village. (see map)

We recommend visiting Hovenweep National Monument in Utah, not far from Mesa Verde to see what we consider the best pit houses in the Four Corners Region. 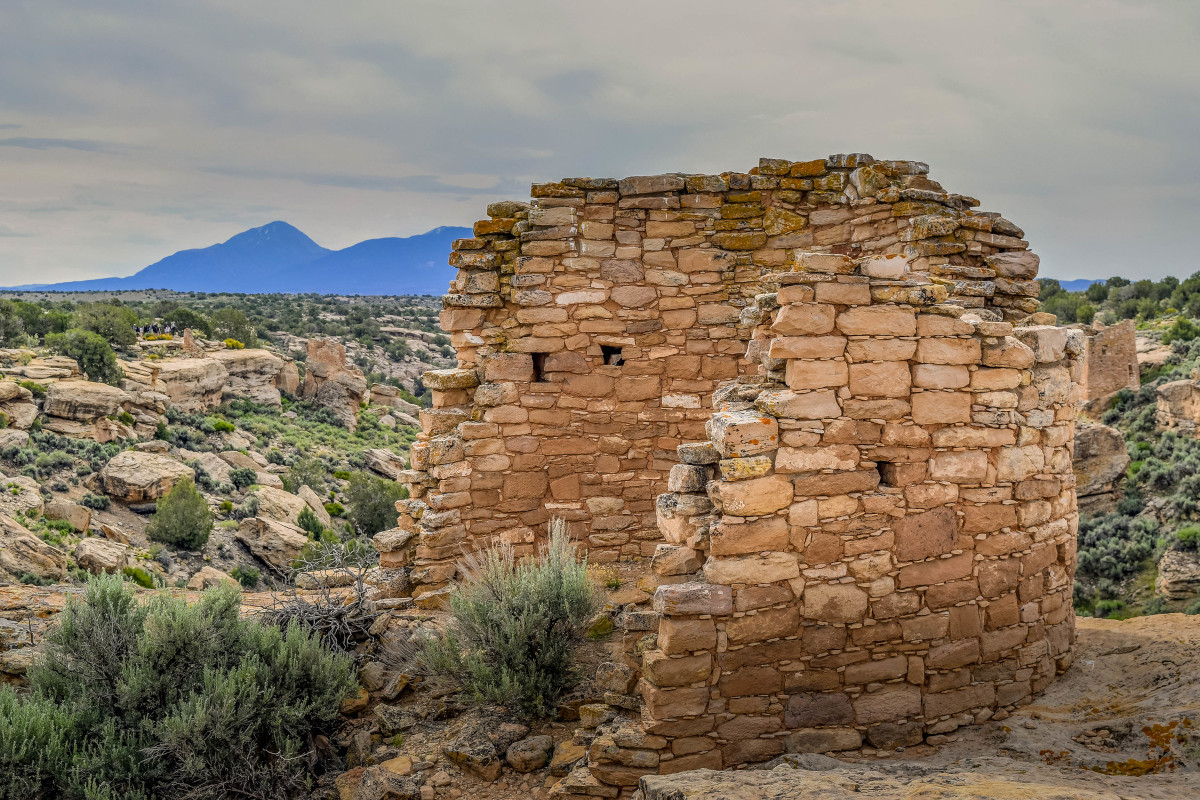 Hovenweep National Monument is located on the Cajon Mesa of the Great Sage Plain between Blanding Utah and Cortez Colorado, it’s land straddles the Colorado / Utah state line.  From Utah the road that leads to the monument is south of Blanding and north of Bluff Utah [map]

Hovenweep National Monument is one of our favorite stops for above ground dwellings and villages. It’s central to Mesa Verde, Edge of the Cedars State Park, Cedar Mesa, Bears Ears National Monument, and Canyons of the Ancients National Monument making it an easy addition for planning a trip to the Four Corners Region.

Hovenweep is a collection of six groups of Ancestral Puebloan villages that can be visited from a walking trail loop. The entire loop will take less than two hours depending on how long you spend at each point of interest.

Constructed like the Holly, Hackberry and Horseshoe configuration, is at the head of Allen Canyon. It consists of a cluster of room blocks and the remains of a tower, estimated to house 80–100 people, that was constructed on a boulder that sits below the rim of the canyon. There are up to seven kiva depressions around the spring. Remnants of wall alignments below the rim on the talus represent possible terrace farming.

This is an offshoot of Hovenweep Canyon. Cutthroat Castle, the largest of the remains, is on the north side of the stream. Cutthroat is unique among the units due to the lack of a spring, the numerous kivas and the fact that much of the architecture sits below the rim.

The largest and easternmost village contains small and large clusters of pueblo buildings built partially underground. It was most heavily populated in between 1150–1300, the Pueblo III period. Earlier residents include Basketmakers from 200–450 and during the second Pueblo period 900–1150.

Located at the head of Keeley Canyon. Holly is the site known for a rock art panel that has been interpreted as a summer solstice marker. The five named buildings at the site are Curved Wall House, Great House, Holly Tower, Isolated Boulder House and Tilted Tower.

Hackberry was a medium sized Pueblo III village in the east fork of Bridge Canyon. About 250 to 350 inhabitants are thought to have resided in the Hackberry Group. Located about 500 yards away, the Horseshoe group consists of four pueblo buildings that form a U-shape. Horseshoe Ruin had a dam at the rim to create a reservoir. Horseshoe House is a D-shaped structure containing three rooms surrounding a possible central kiva. The architectural style suggests ceremonial or public use. About 800 years ago the buildings were constructed with “precisely fit” stones and set with mortar of sand, ash, clay and water.

This is the largest collection of pueblo buildings at Hovenweep and was populated with up to 500 people. It is in Little Ruin Canyon which is made up of Square Tower, Tower Point, and Twin Towers ruin groups. Towers at Hovenweep were built in a variety of shapes; D-shapes, squares, ovals and circles and for several purposes, including tool and grinding work areas, kivas for ritual functions, residential rooms and storage. Towers have limited access, contain few windows and many have narrow slots or peepholes placed in the walls. The slots and doors of Hovenweep Castle, in Square Tower Group, have been shown to define an apparent solar calendar. The building is aligned so that light is channeled through openings into the building at sunset of the summer solstice, the winter solstice and the spring and fall equinox. The light falls in a predictable pattern on interior door lintels.