Three Ghost Towns You Should Visit

The western United States is peppered with ghost towns from the mining era of the late 1800’s and early 1900’s. The gold rush of California ignited a wave of prospectors hoping to strike it rich, some did, many didn’t. Utah is home to many of these former boom towns where gold, silver and other precious minerals were found.  When the mines dried up so did many of these towns leaving us remnants and stories of the past. Some say that many of these former campsites and towns are haunted.

Utah is filled with old abandoned mining towns many of which aren’t much more than a pile of dilapidated barn wood on what used to be a framed building. But many are still in tact and some even restored that are worthy of a visit. Three such towns in southwest Utah worth visiting are Grafton, Silver Reef, and Frisco.

Grafton is a ghost town, just south of Zion National Park in Washington County, Utah, United States. Said to be the most photographed ghost town in the West, it has been featured as a location in several films, including 1929’s In Old Arizona—the first talkie filmed outdoors—and the classic Butch Cassidy and the Sundance Kid.  The nearest inhabited town is Rockville. 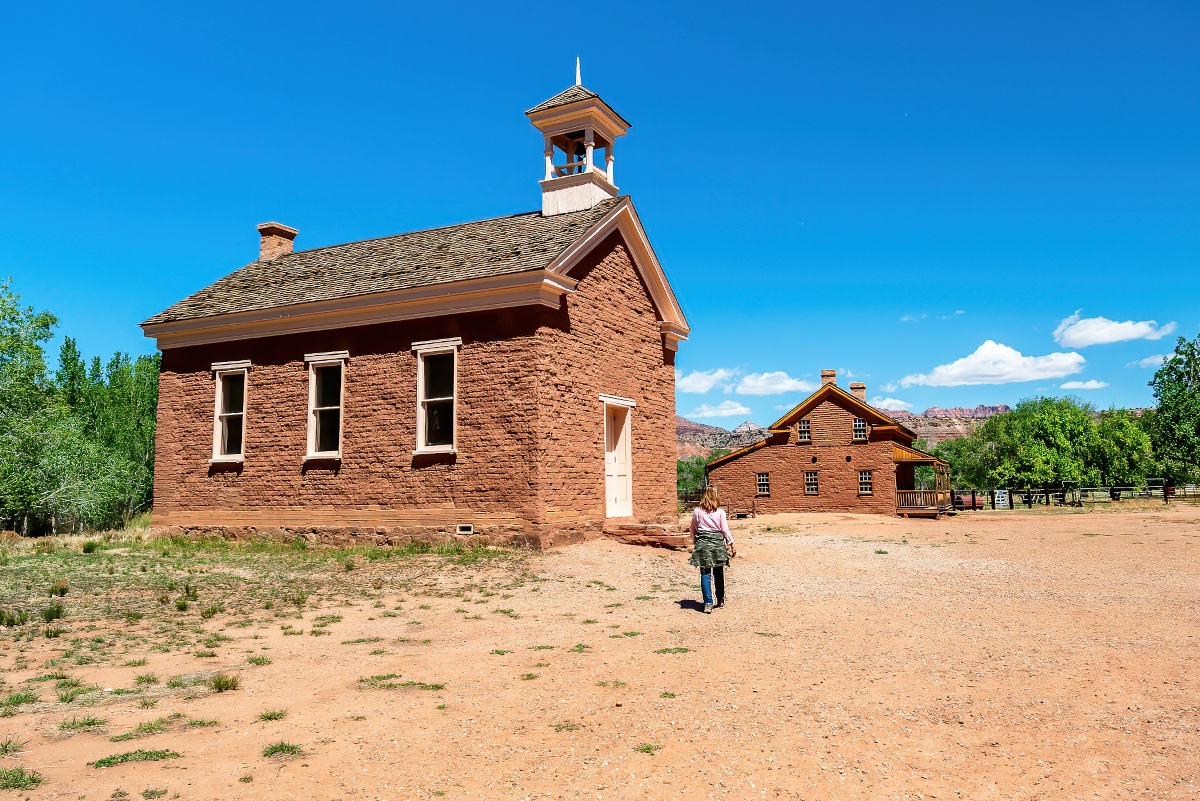 The site was first settled in December 1859 as part of a southern Utah cotton-growing project ordered by Brigham Young . A group from Virgin led by Nathan Tenney established a new settlement they called Wheeler. Wheeler didn’t last long; it was largely destroyed on the night of January 8, 1862 by a weeks-long flood of the Virgin River, part of the Great Flood of 1862. The rebuilt town, about a mile upriver, was named New Grafton, after Grafton, Massachusetts. 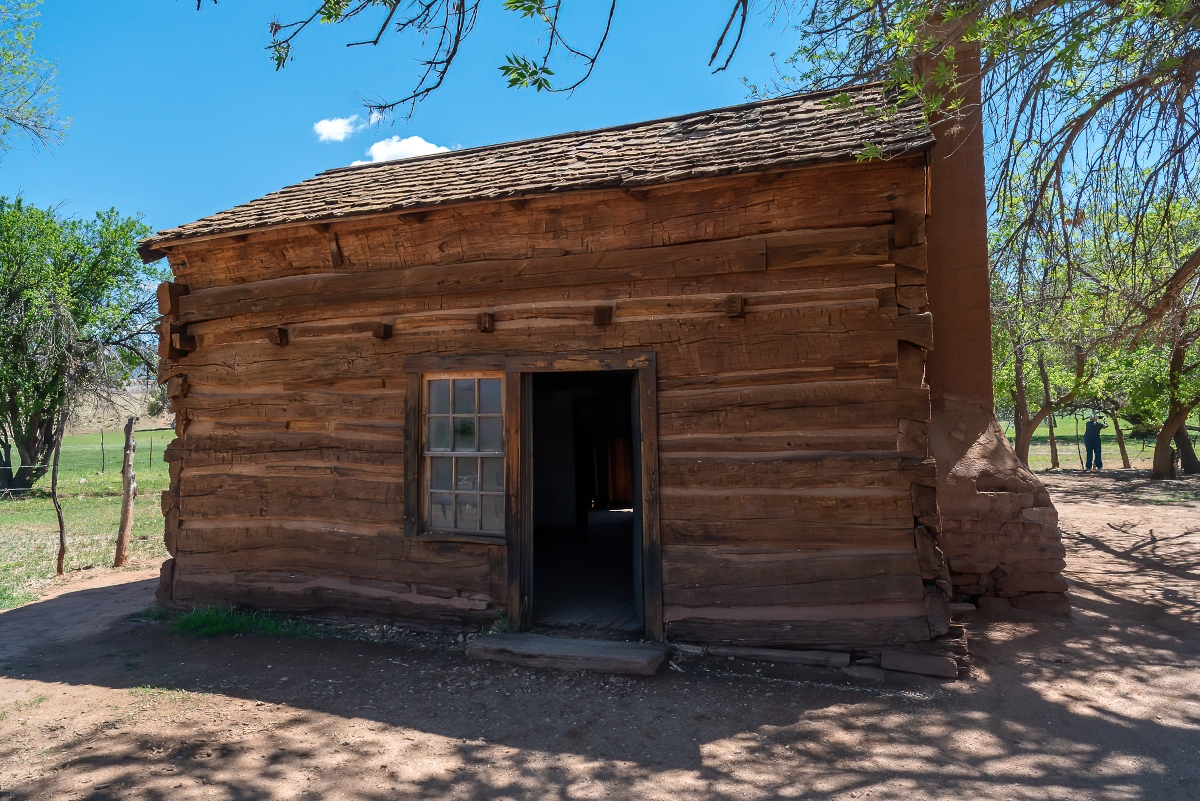 The town grew quickly in its first few years. There were some 28 families by 1864, each farming about an acre of land. The community also dug irrigation canals and planted orchards, some of which still exist.

Flooding was not the only major problem. One particular challenge to farming was the large amounts of silt in Grafton’s section of the Virgin River. Residents had to dredge out clogged irrigation ditches at least weekly, much more often than in most other settlements. Grafton was also relatively isolated from neighboring towns, being the only community in the area located on the south bank of the river. In 1866, when the outbreak of the Black Hawk War caused widespread fear of Indian attacks, the town was completely evacuated to Rockville. 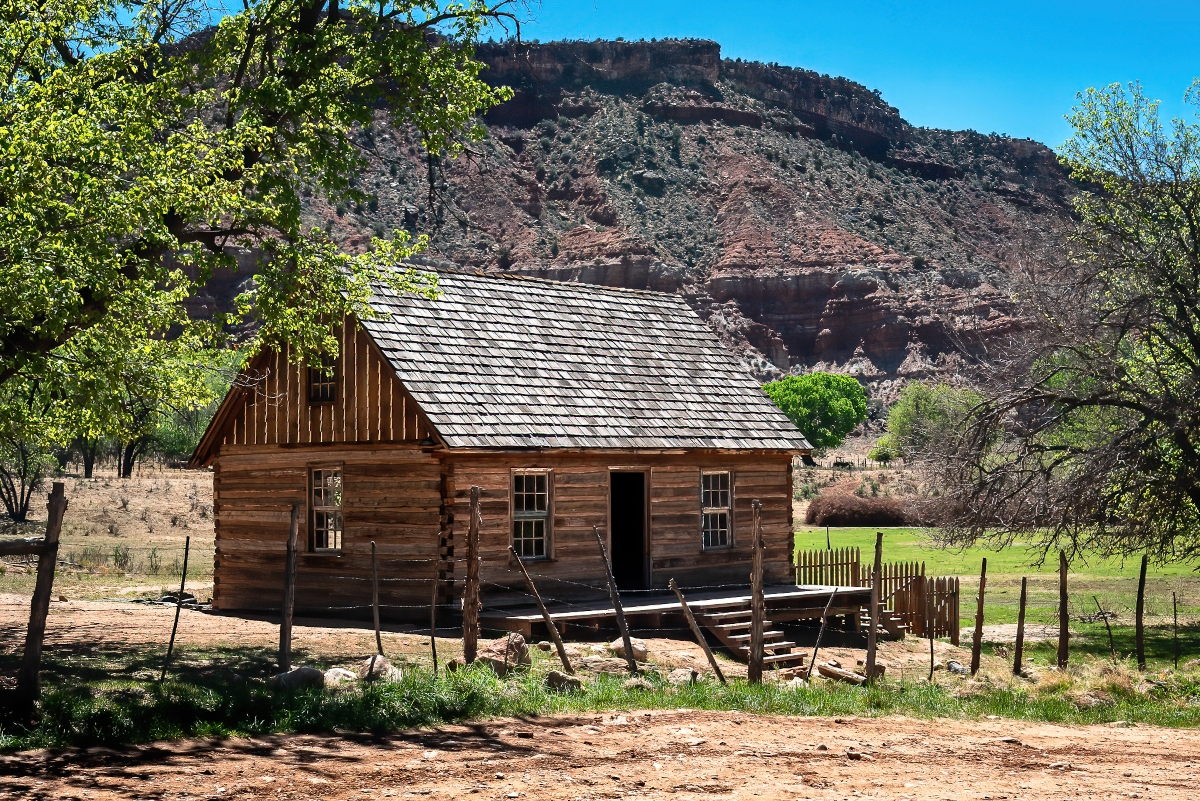 Continued severe flooding discouraged resettlement, and most of the population moved permanently to more accessible locations on the other side of the river. By 1890 only four families remained. The end of the town is usually traced to 1921, when the local branch of the Church of Jesus Christ of Latter-day Saints was discontinued.  The last residents left Grafton in 1944.

A United Press news item dated May 23, 1946, stated that the town was purchased by movie producer Harry Sherman as a film location site. He bought it from William Russell, 80, a descendant of the co-founder, and one the town’s three current inhabitants. In June 1997, the Grafton Heritage Partnership was organized to protect, preserve, and restore the Grafton Townsite. With cooperation from former Grafton residents, the Utah State Historical Society, the BLM, the Utah Division of State History, and others, the old church, Russell Home, Louisa Foster Home, the Berry fence in the cemetery, and John Wood home were restored, with new windows, doors, roofing and other structural enhancements to represent the period in which they were built. In addition, 150 acres of farmland were purchased, on which agricultural operations are performed to enhance the farming appearance. The site is under 24-hour surveillance.

From approximately 1875 to 1885 Silver Reef was the largest town in the southwestern part of what is now the state of Utah.  Silver was discovered in the sandstone formations of this area and mine infrastructures were quickly created. 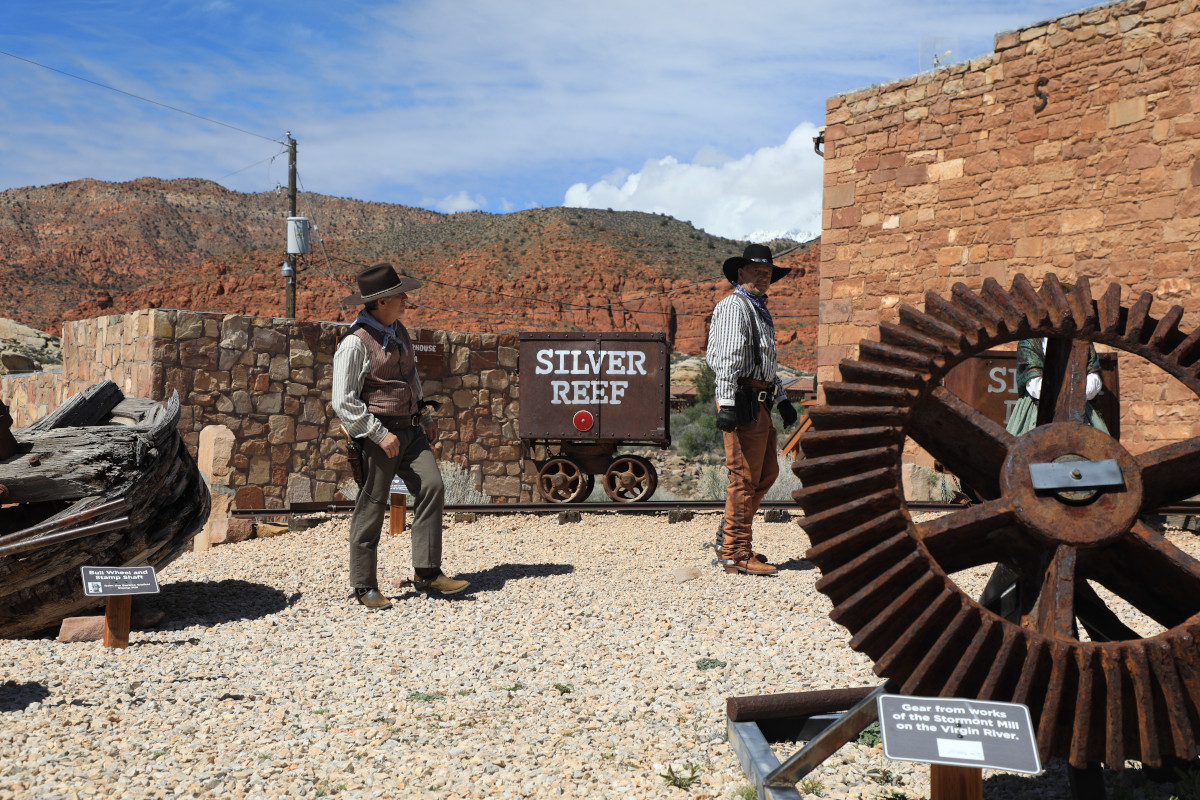 This was a wild west town like many of this era where gambling, horse racing, shooting contests, and other such activities dominated the free-time of the miners and those who supported the mining activity. Banks, hotels, saloons, merchandise shops, and restaurants were erected to support the residents. 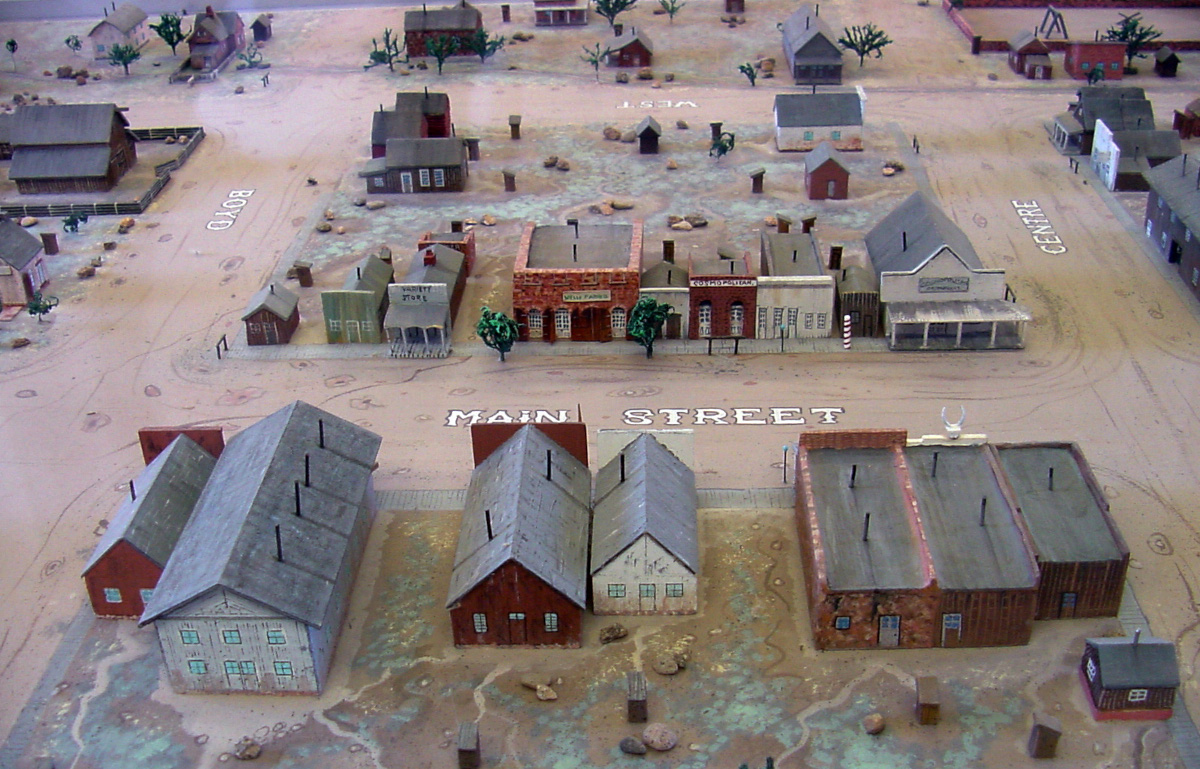 Shanty shacks, tents, and other creative structures were some of the housing options of the miners. Wooden buildings dotted the community and more than once a fire destroyed sections of the town. Several cemeteries still exist and the remains of many sandstone constructed buildings.  Two main buildings that have been restored, one of which houses an art gallery and museum and is open for visitation.  A small building to the south of the museum shows a miniature recreation of the town in its heyday. Remnants of stamp mills and other structures also dot the landscape and mine shafts and tunnels are visible. 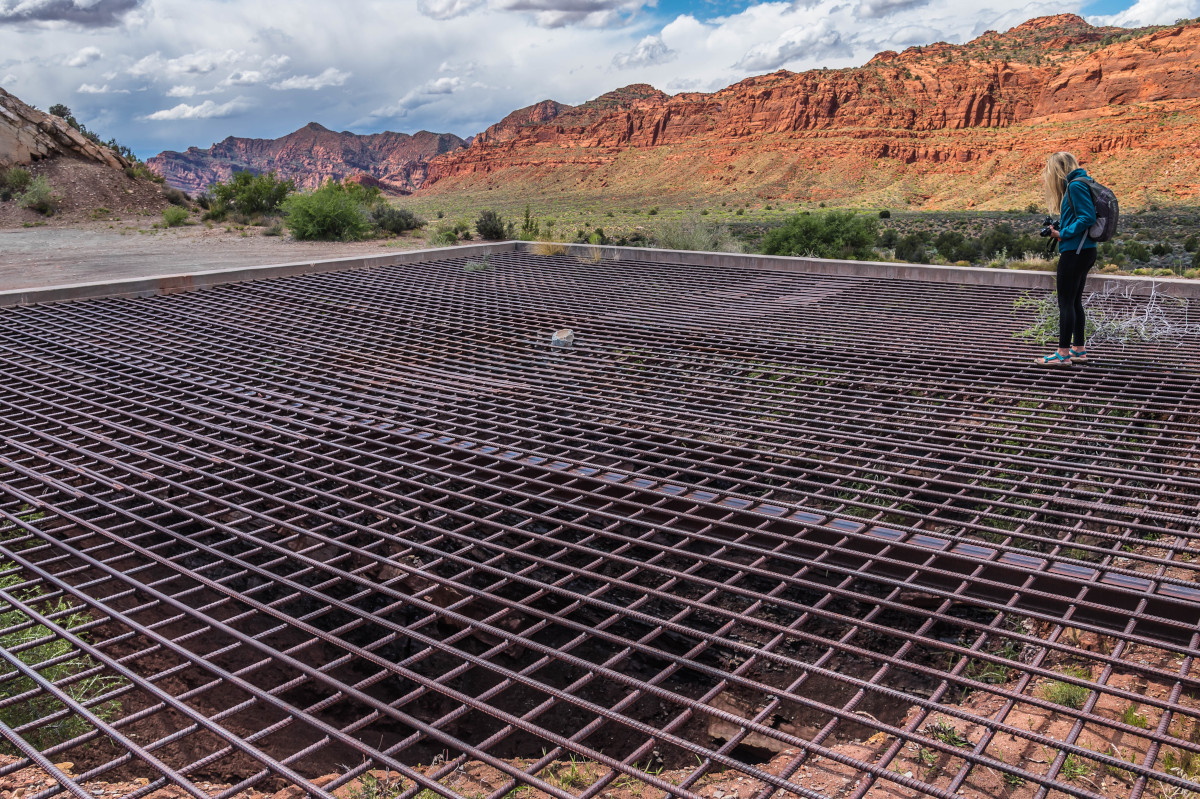 Silver Reef is located just west of the town of Leeds, Utah just off Interstate 15, and approximately 10 miles north of St. George, Utah.

Located on the southern tip of the San Francisco Mountains on the Ely Highway (Hwy 21) 15 miles west of Milford Utah. You have to watch carefully for the turn off from the highway, there’s a non-descript memorial marker next to a covered picnic table, which is where you turn to take the road to the old mining site. There are two roads behind the memorial, take the left road. The road to the right is marked with no-trespassing signs. Frisco is on private property so please be respectful. 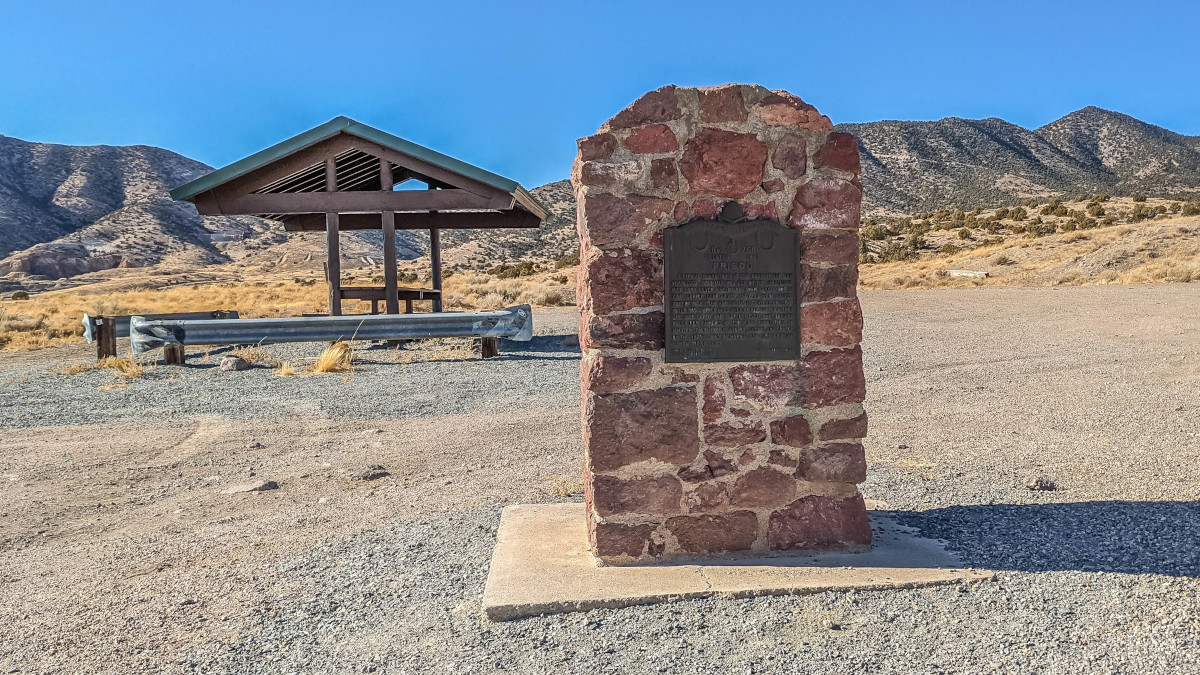 The left road ends at the Frisco Cemetery, which is where we parked. The cemetery is typical old west with faded stone markers sparsely scattered within an unkept fenced area.  It must of been a harsh existence in this isolated mining town on the rugged slopes of the San Francisco Mountains in southern Utah’s west desert. What caught our attention were all the gravesites of young children and babies of families attempting to make a living in this dry and desolate environment. We can only imagine the heartache and pain suffered by the families coming here with high hopes of finding a path to a better life. Old western cemeteries like this often give clues to what life must have been like. 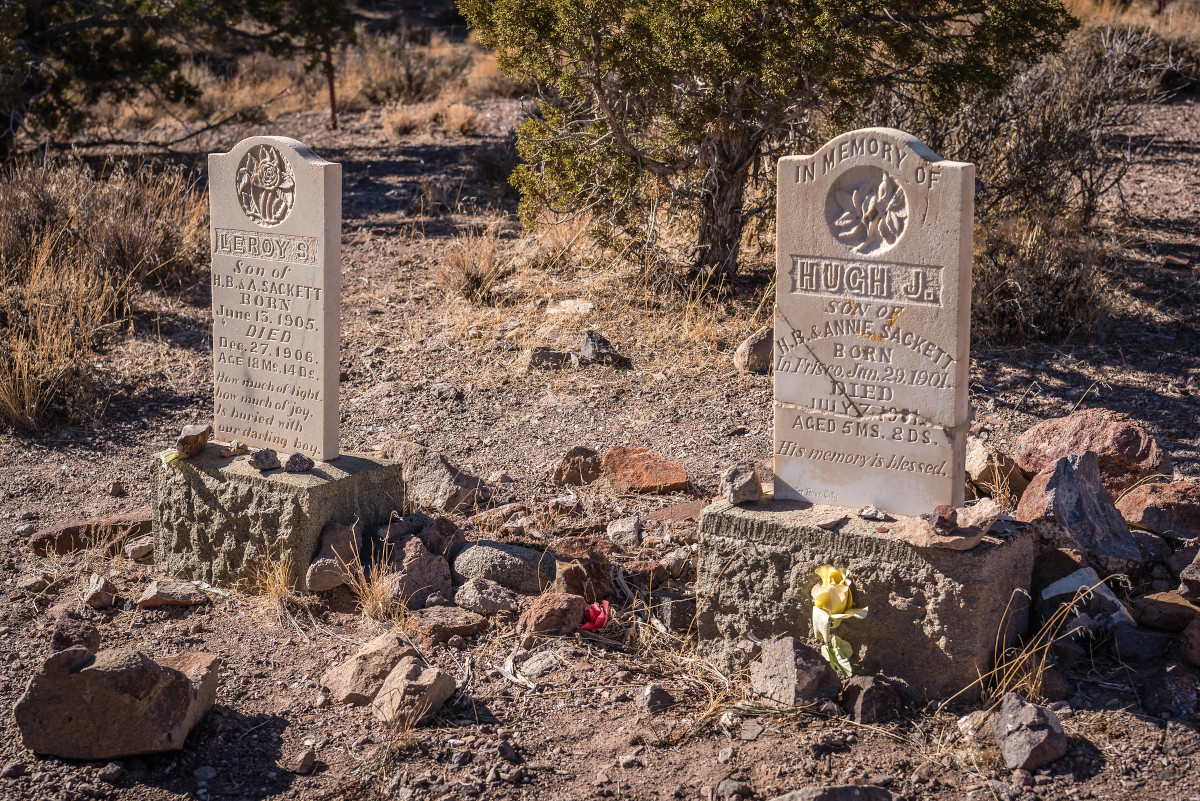 From here we hiked north across a wash until we came to a road that lead to what must have been a town next to the mining operation. From our research we learned that silver was discovered in 1875 by a couple of prospectors who sold their claim for $25,000 thinking they had struck it rich. Little did they know at the time that Frisco would become the richest silver mining operation in its day that would ultimately produce over $50 million in silver. By 1877 there were two smelters, one of which had the unusual feature of beehive shaped charcoal kilns, which are located east of this site. Eventually an extension of the Utah Southern Railroad was brought to Frisco that was completed in 1880 opening Frisco to the rest of the country, the population grew to 6,000. The Horn Silver Mine at this time was considered the richest silver mine in the world.

Like most mining boom towns, violence was the rule of the day, murder became a daily occurrence. To clean things up a sheriff was hired to quell the lawlessness. A man by the name of Pearson from Pioche Nevada was hired to do the job. After showing up in town, Sheriff Pearson immediately began gunning down the town’s known outlaws. Pearson was said to have run the town with an iron fist that nobody dared cross, and Frisco’s lawlessness was resolved in short order, which made the sheriff a bit of a celebrity in the history of the Old West. 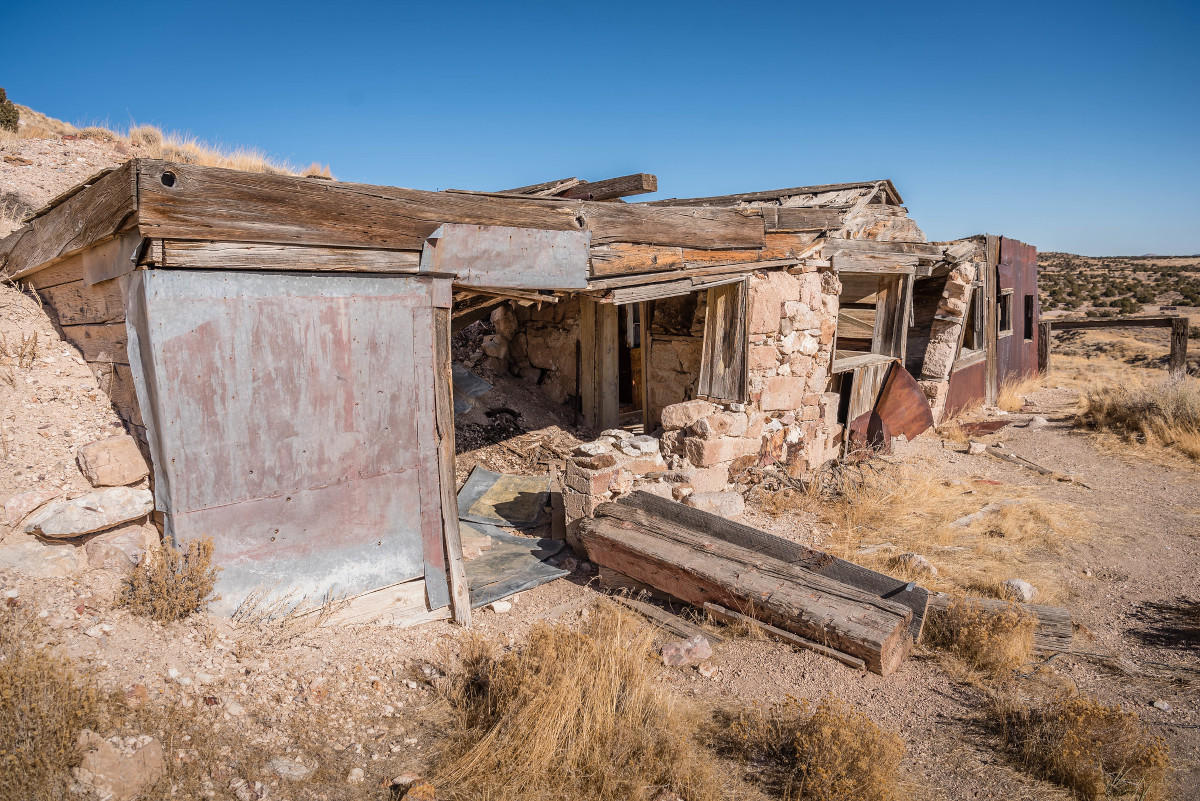 The End of the Town

Frisco thrived until the largest mine collapsed on February 2, 1885. They say the collapse was so immense that they could feel in in Milford. Eventually the mine reopened with the exception of its richest parts. The town was never able to fully recover from the mining disaster and by 1920 was all but abandoned. 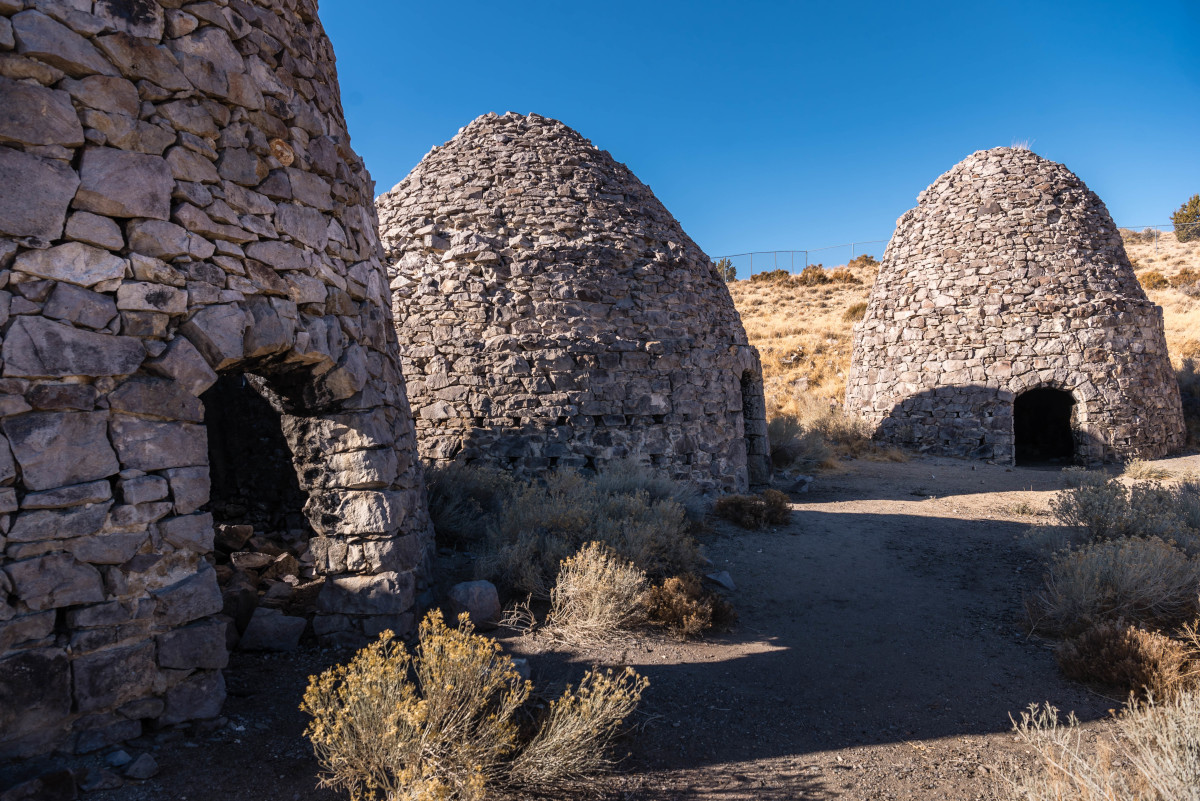 As we continued exploring the area we came upon a number of old dilapidated buildings, some of wood, others of stone and brick. On the hillside above the ruins are roads leading to mine shafts that have been grated closed to prevent people from entering them. We followed one such road the traversed the hillside that eventually lead to a cabin that was still in relatively good repair next to a grated mine shaft. We spent three hours exploring the area and could have stayed longer but had other places to visit before dark. We left knowing that we would be back believing we only scratched the surface with the time we had.  For more information on Frisco’s history click here.