East Of The Reef

East of The Reef

From Capitol Reef on Scenic Highway 24 to Hanksville, Utah. 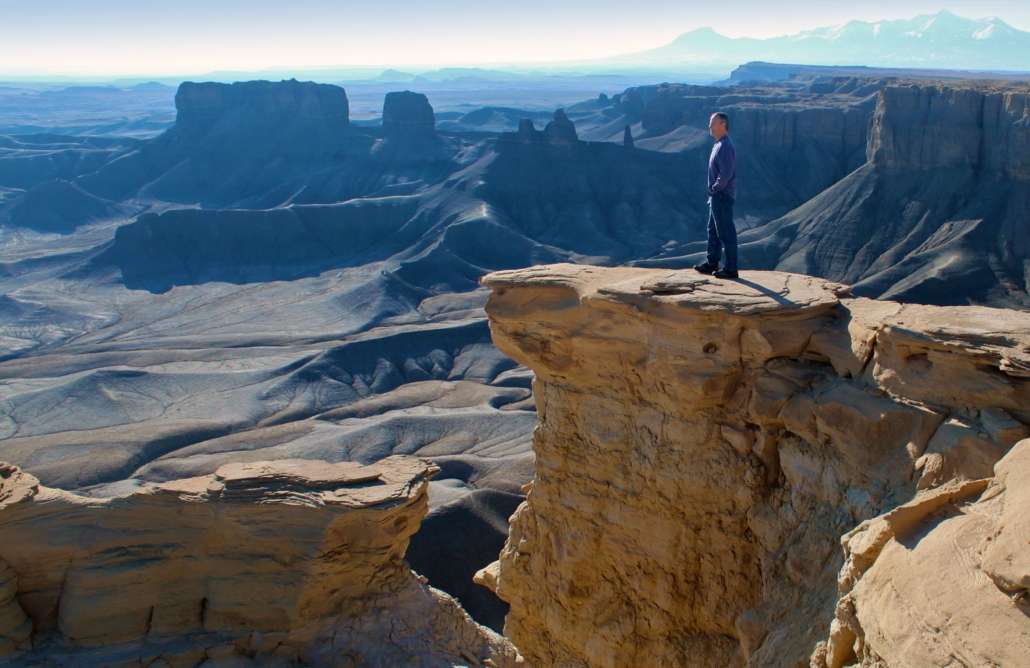 Connecting emotionally with a destination is often contingent on the type of experiences you have, with people, with unique locations, and the feelings that are generated within your soul on such occasions.

A rock pillar on the hardscrabble rocks of Mt. Ellen, above the tree-line, marks the highest point of Utah’s Henry Mountains. From here one may view the scenery in a complete 360 degree panorama. 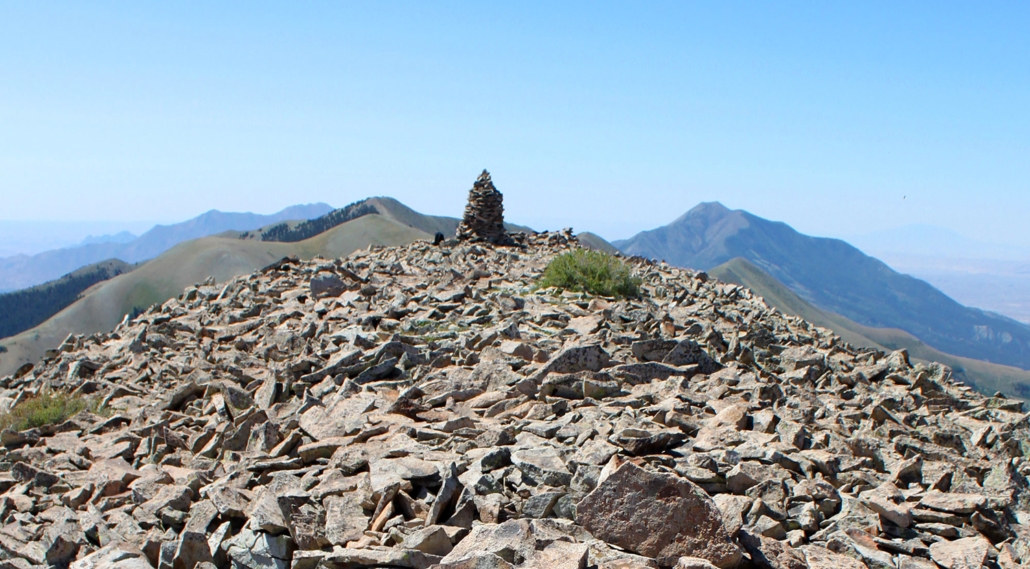 Such a connection for me on a warm summer afternoon at 11,500 feet on top of Mt. Ellen in the Henry Mountains of south central Utah.  My experience (Mark), was greatly enhanced by the fact that I had spent a great deal of time exploring the area surrounding this viewpoint. As I stood on top of Mt. Ellen, and turned to every minor point of the compass I could identify what I was seeing, how far away it was, and recall a personal experience at that particular location, and in some cases even recall a significant story from history.  It was one of those magical moments where I felt a sense of awe, and a greater appreciation for life, and my place in the grand scheme of things.  As a person with a belief that God created this for all of us, it was a time to quietly express gratitude for what I was seeing,  sensing, and recognizing within myself.

Stories of history have always brought me greater appreciation for an area.  There’s something about the wild side of this region that really is intriguing.

This is the place where outlaws roamed free, knowing that they knew the land better than their pursuers (lawmen) and that they could easily evade them in the maze of broken topography that surrounds the Henry Mountains.  The story is told of how one set of outlaws were pursued into some nearby canyons by a sheriff and his posse.  The entire posse became lost and were unable to find water or a way back out of the deep maze of canyons they found themselves in.  From a high vantage point the outlaws observed this predicament of their pursuers, and shot their rifles to signal to the sheriff and his posse to come toward them.  A negotiation took place where the outlaws suggested they would show the lawmen the way to water, and the way out, if they would promise to never return.  With no alternative, the Sheriff agreed to the terms, and he was also made to leave his pants behind and ride 70+  miles to  his home in just his underpants.  Read on to find out who these outlaws were.

Rough Country
Here a herd of buffalo roam freely on the slopes of the Henry’s, and here Native Americans and European pioneers struggled to eek out a paltry existence.  The desert landscapes east of Capitol Reef National Park are some of the most unforgiving and remote to be found in the continental United States.  Indeed, because of the deep canyons and rough mountains, this area was one of the last to be explored in the lower 48 states.

The information that follows will give you insights and ideas about what to do, where to go, and how to experience this magnificent and remote region. Learn more at CapitolReef.org. 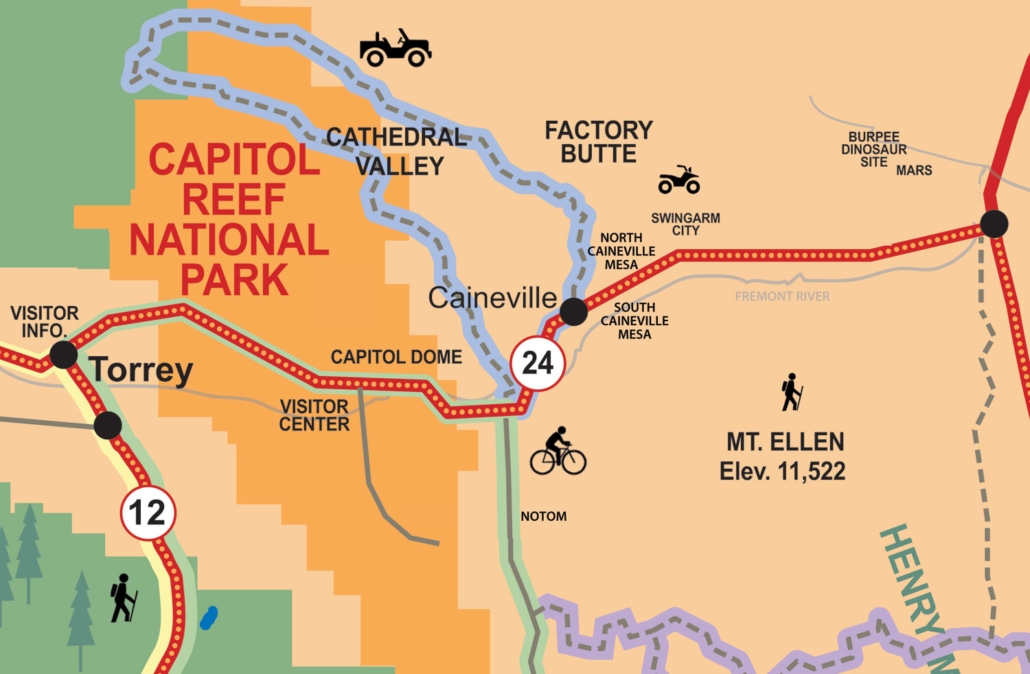 Traveling East from Capitol Reef National Park on Scenic Highway 24 toward Hanksville, Utah is an area that provides access to topography that literally looks like the surfaces of the moon and the planet mars. So much so, that Disney used the area for the backdrop of their feature film John Carter From Mars.

During the current Coronvirus (Covid-19) epidemic we thought we’d take you on a virtual tour of this lesser known Scenic Highway in Utah. We’ve spent a great deal of time exploring this area, and we suggest you’ll find it to be memorable for the astonishingly coarse terrain.

Central to this section of other-worldly space is the small community of Caineville, Utah.  Surrounding Caineville are such attractions as Cathedral Valley, North and South Caineville Mesas, the Henry Mountains, Factory Butte, Swing Arm City OHV/ATV area and many other interesting locations. 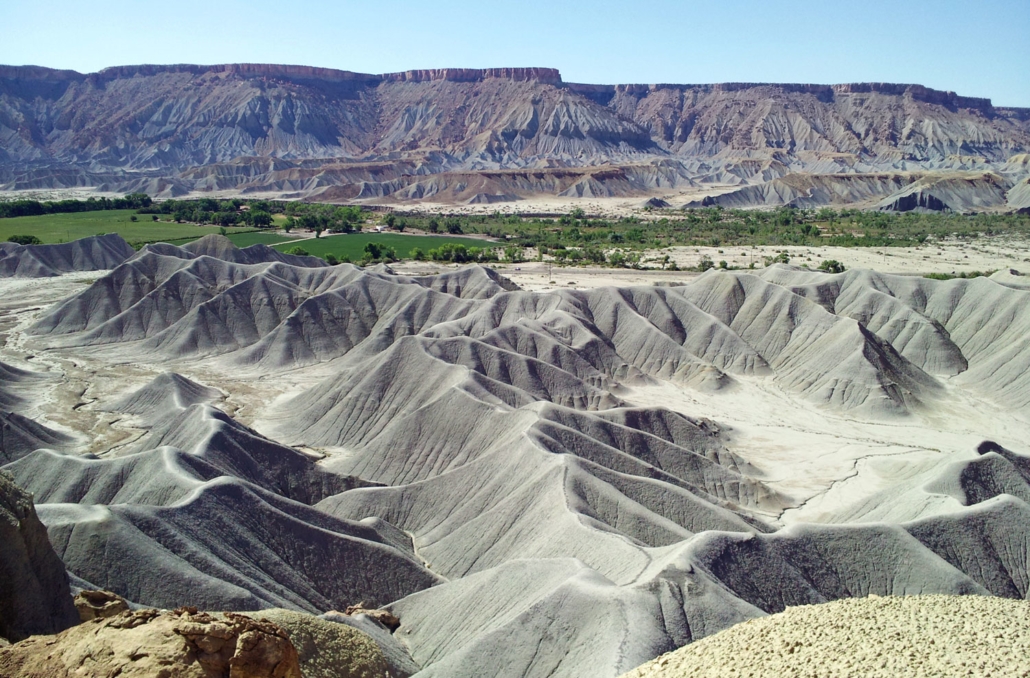 Planning/Preparation: There is just one small hotel in Caineville but lodging and dining services are also available in Hanksville.  Be advised that if you are going very far off the highway you should come well prepared with vehicles that can handle off-road terrain, and plenty of food and water for your journeys. Also know that the trails in this area are rated moderate to difficult and as best suited for those who are active and able to traverse more challenging terrain. Much of this area ranges in the 4,000 to 5,000′ elevation and is best explored in non-summer months but early mornings in summer can still offer some good outdoor experiences.

Cathedral Valley
This is a back-country dirt road that leads into an area of stone towers and rock reef formations.  The drive can take between 1/2 a day to a full day.  Be careful of your time and the route you take in and out. On one occasion I (Mark) pursued a full loop route and got caught trying to get  out of the area in the dark.  Roads look different in the dark when you can’t see surrounding terrain, so measure your time appropriately.  Also come prepared with all the appropriate supplies of water, food, and warm gear for an unforeseen emergency need. See the map options below for more details.

Factory Butte rises out of the east desert along scenic highway 24 between Capitol Reef National Park and Hanksville, Utah. 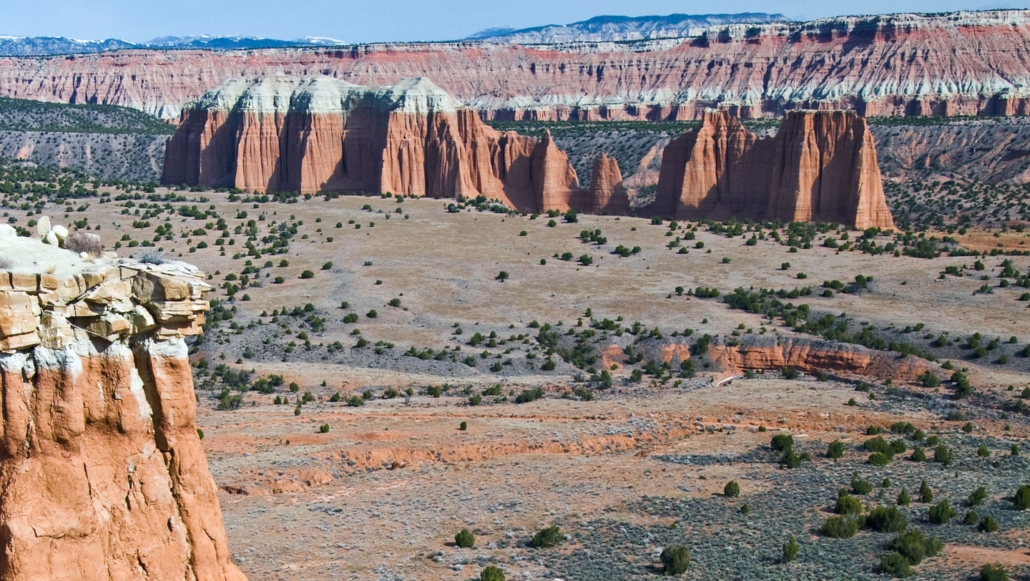 Factory Butte
A significant area landmark, Factory Butte stands above the high desert terrain like a beast that refuses to yield to ravages of time.  Nearby you’ll find an area sometimes referred to as The Moonscape and here you’ll find some great areas to capture photos from the high cliffs above the moon-like landscapes.  Early mornings and late afternoon/early evening are the best times to capture photos of this Factory Butte and Moonscape area.

Factory Butte rises out of the east desert along scenic highway 24 between Capitol Reef National Park and Hanksville, Utah. 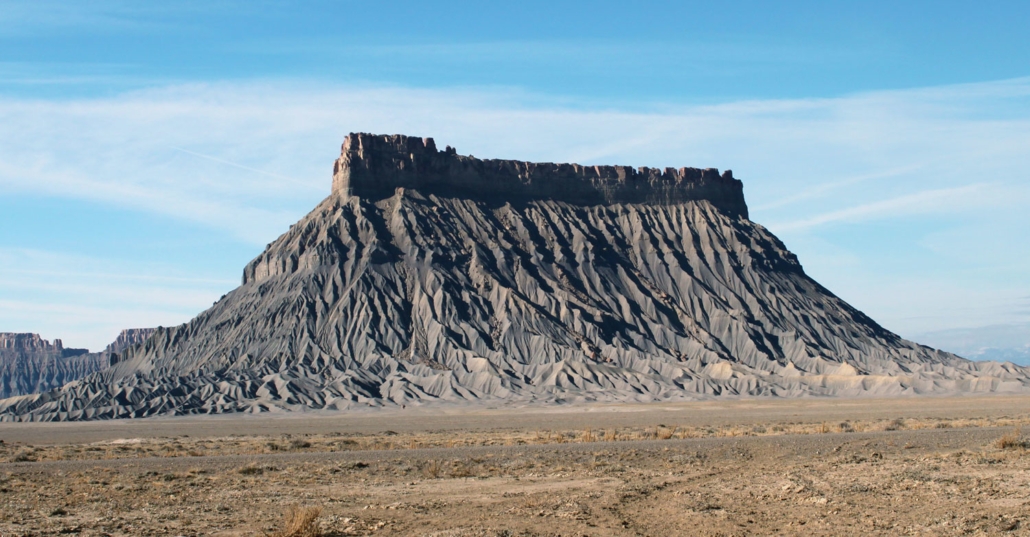 Swingarm City
Also nearby is an area referred to as Swingarm City, a dramatic section of steep ridges open for OHV and ATV recreation. The appeal of this segment of land is the colorful erosion and vast, moon-like steep hills comprised of bentonite clay. This is a setting for thrill-seeking motorcycle and ATV riders, of all levels, since the terrain-riding difficulty ranges from standard to extreme. This is an area that has been used as the scene for many motocross and ATV videos and is famous for its stunning views and  smooth terrain, free of vegetation.  Access this Swingarm City area via the unpaved Factory Bench Road (Coal Mine Road), found about seven miles east of Caineville on Highway 24. This road is well-maintained but is best when dry.  Approximately ten miles down this road you will find free designated camping spots (no water or toilets available). Here you also find a colorful, eroded section of canyon with small arches and fins, as well as a few deep ravines.

Motorcyle riders turn near the top of a steep ridge on the unique terrain of Swing Arm City near Factory Butte, Utah. 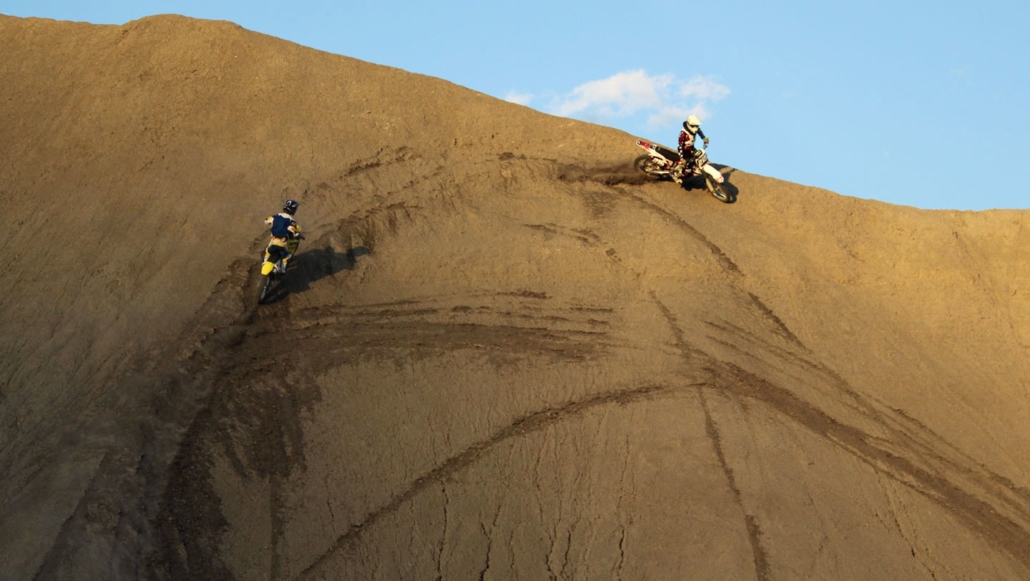 Friends in a UTV race down the bentonite clay landscape of Swing Arm City. Utah. 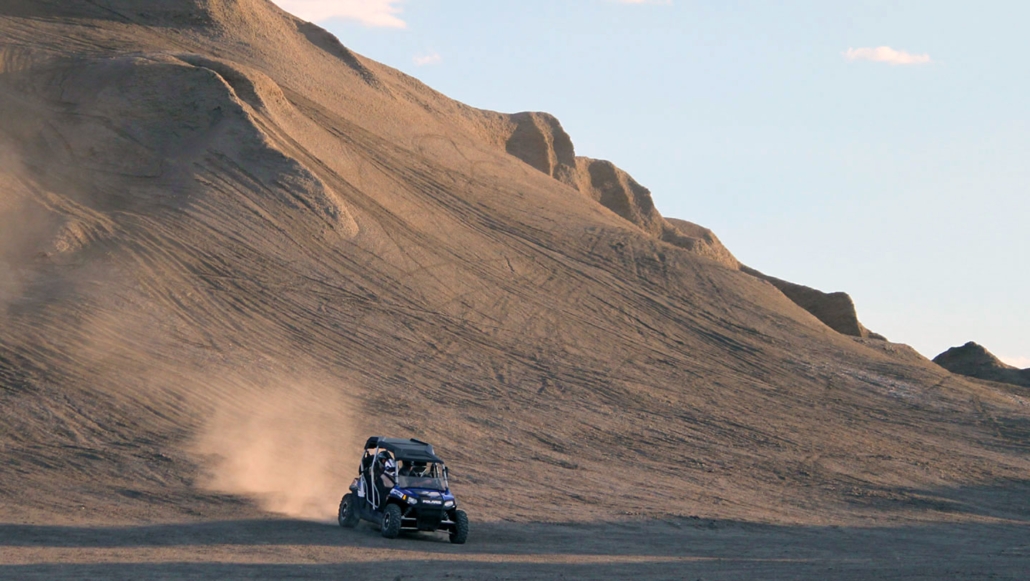 Notom Road
Southwest of Caineville is the Notom Road, also known as Notom-Bullfrog Road, which is a well known scenic byway that is paved for the first 11 miles. The Notom Road eventually turns to dirt road as it flow past many great slot canyon hiking trails and potential bike routes, including access to Capitol Reef’s back-country trails such as Lower Muley Twist and Halls Creek Narrows. On the south end this road connects with the Burr Trail where travelers can loop left toward Bullfrog and Ticaboo, or right (West) toward Boulder, Utah and Scenic Byway 12.  Remember to check on weather conditions before setting out on any dirt roads such as the Notom Road. Mt. Ellen
The Henry Mountains sit just southeast of Caineville and the highest point on these mountains, Mount Ellen, reaches over 11,500 feet. Mount Ellen is known as an Ultra Prominent Peak, because it stands out significantly from the surrounding mountains.  We suggest that this offers one of Utah’s best 360 degree views.  From here you see Thousand Lakes Mountain, Boulder Mountain, The La Sal and Abajo Mountains, the San Rafael Swell and the Waterpocket Fold. You can see well into the Dirty Devil River Basin and areas such as Robber’s Roost where the famous outlaws Butch Cassidy and the Sundance Kid hid with their gang from the law. 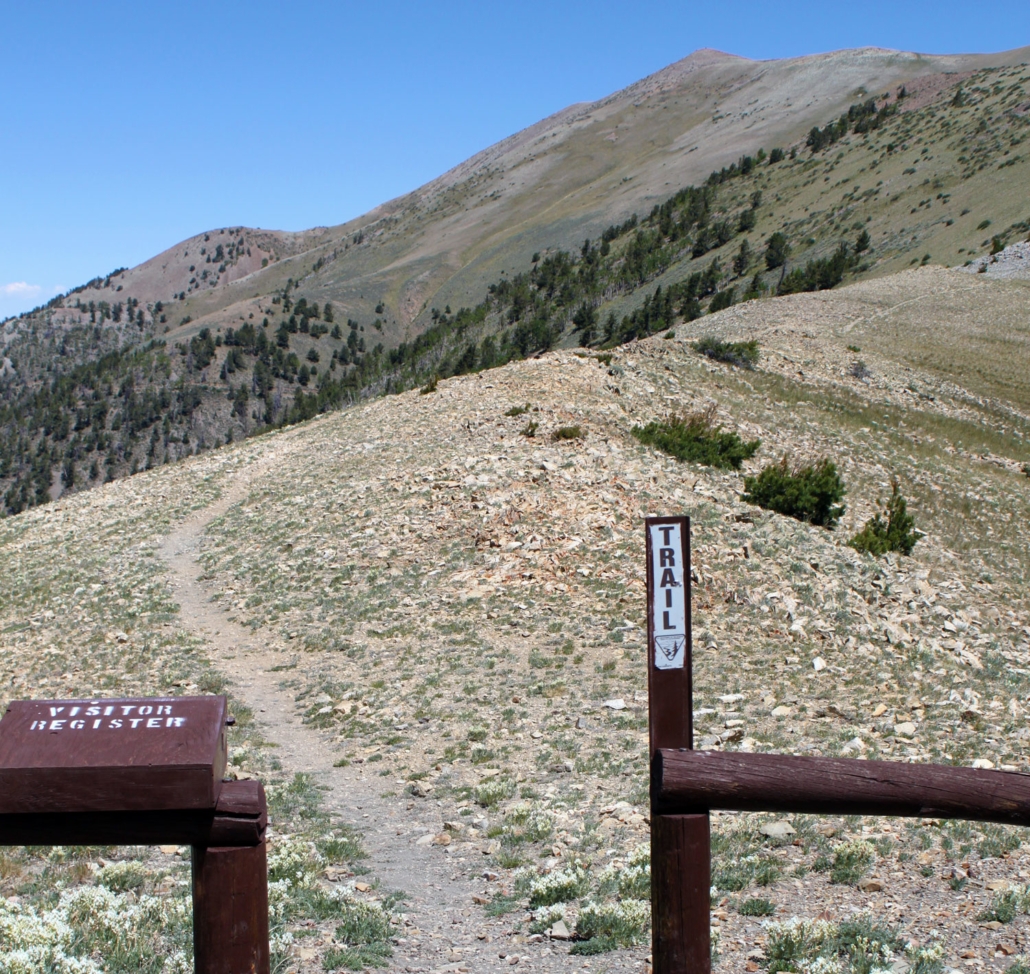 A view from the top of Mt. Ellen on the Henry Mountains of Utah. Looking north and east toward the San Rafael Swell, and the basin of the Dirty Devil River where the outlaw Butch Cassidy would hide from the law. 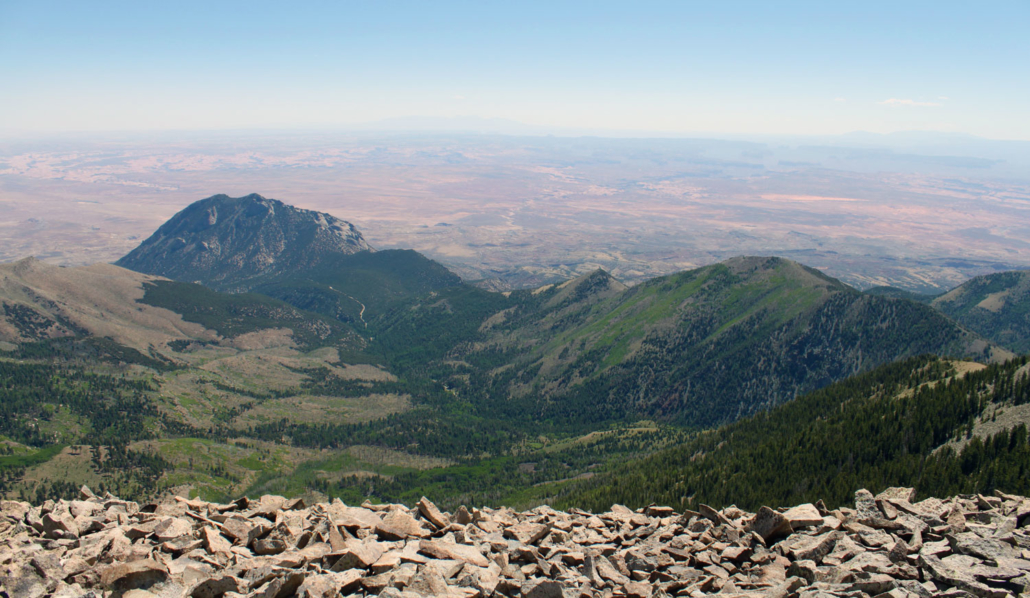 A Brief History of the Area
According to one recorded story, leaders of the Church of Jesus Christ of Latter Day Saints sent Brigham Ney and Elijah Cutler Behunin to settle the Caineville area.  It is said that Ney left after just one night, but Behunin stayed with his family of nine and they built the first cabin in the area. Other sources suggest that a Walter Hanks led the way to the area, on foot, and he was followed by Behunin, William Stringham and Yergen Jergensen who together managed to get a wagon through the rugged gorge of what is now Capitol Reef National Park.  By the spring of 1883, other families entered the area and Caineville grew into a small agricultural community. During the winter of 1892-93 diphtheria struck the community, and several children and adults were stricken with the disease. Over the years the town has been impacted by several floods, and in 1909, after a particularly devastating flood, many farmers and ranchers abandoned the town. Several elements of the community still remain in Caineville today, including the Behunin’s red sandstone cabin, a school-church building, and the cemetery.

Looking over the fields of the Caineville valley area where a few hearty ranchers and farmers still live. Boulder Mountain can be seen in the distance to the southwest. Dramatic eroded landscapes make this region starkly different from most other scenes in the west. 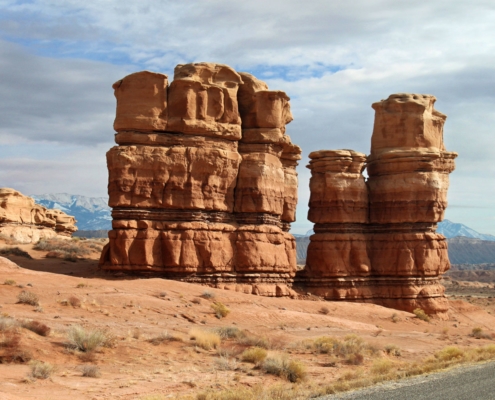 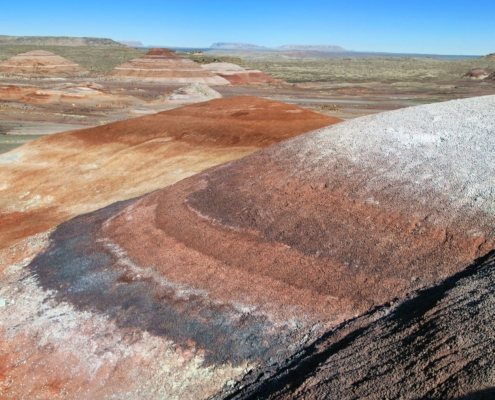 One Tank Trips
Scroll to top