This past November I guided an Arizona Route 66 tour that starts in Las Vegas, ends at Albuquerque and follows Route 66/I-40 through Arizona. One of our side trips includes an afternoon in Sedona Arizona where we join a city tour to a few of the popular sites in the area. Two of the women on my tour asked if we could visit a vortex while in Sedona, which isn’t included with the tour we normally take so I decided to cancel the tour and re-work the plan by adding a vortex and drive it myself.

Sedona is a beautiful community surrounded by red buttes, monoliths, and lush forests in deep canyons. The community is made up of an interesting mix of residents and visitors with a bit of a hippie vib, many coming to Sedona for spiritual healing they believe comes from energy emanating from the area’s vortexes. Native Americans have consider Sedona a sacred place.

So what is a vortex? According to a definition I found on the Sedona tourism website, “Vortexes are thought to be swirling centers of energy that are conducive to healing, meditation and self-exploration. These are places where the earth seems especially alive with energy. Many people feel inspired, recharged or uplifted after visiting a vortex. ”

Of the four best-known Sedona vortexes, I decided to take our group to the Boynton Pass Vortex located near the Enchantment Resort in Boynton Canyon north of town. The vortex  is located just over a half-mile from the Boynton Canyon parking lot and is easy to reach.

In my research of which vortex to visit I read that there are two rock formations in Boynton Canyon that form a single vortex. One is a red sandstone pinnacle to the east known as Kachina Woman with the other a lower unnamed knoll to the west. This particular vortex is a site of balanced energy, which is defined as something along the lines of a balance between masculine and feminine energy like yin and yang.  This is said to be ideal for balancing energy within oneself and with relationships. I’m a bit of a skeptic but this information got the ladies on my tour very excited and eager to feel the energy, and hey, who doesn’t need more energy?

Robert the Flute Player Something I didn’t know ahead of time is that the Boynton Pass Vortex is visited daily by a Reike Flute player who hands out heart-shape sandstone rocks to everyone he encounters. As luck would have it, we showed up at the trail-head right when Robert did. He gave each of us a heart-shaped rock and directions to the vortex. We later caught up to him where he was playing his flute on top of the unnamed knoll at the vortex. My wife and I joined him at the top, the way up was a bit of a scramble so our ladies decided not to come with us. It was a wonderful experience, Robert plays the flute beautifully and is doing his part to spread peace and love in the world. Did I feel energy? I can’t say for sure but the experience sitting with Robert was peaceful and enjoyable.

Getting there From 89A in Sedona take Dry Creek Road, which will become Boynton Pass Rd.  Stay on Boynton Pass Rd until it ends. Turn Right onto Boynton Canyon Rd and the parking area and trail head is about one-tenth of a mile on the right.  If you get to the gate of enchantment Resort, you’ve gone too far.

What to bring Bring water on hot days. otherwise not much is needed since this is a short hike. At most take a daypack for water, snacks, sunscreen, and camera.

When to go Year-round but Fall and Spring have the most favorable weather. 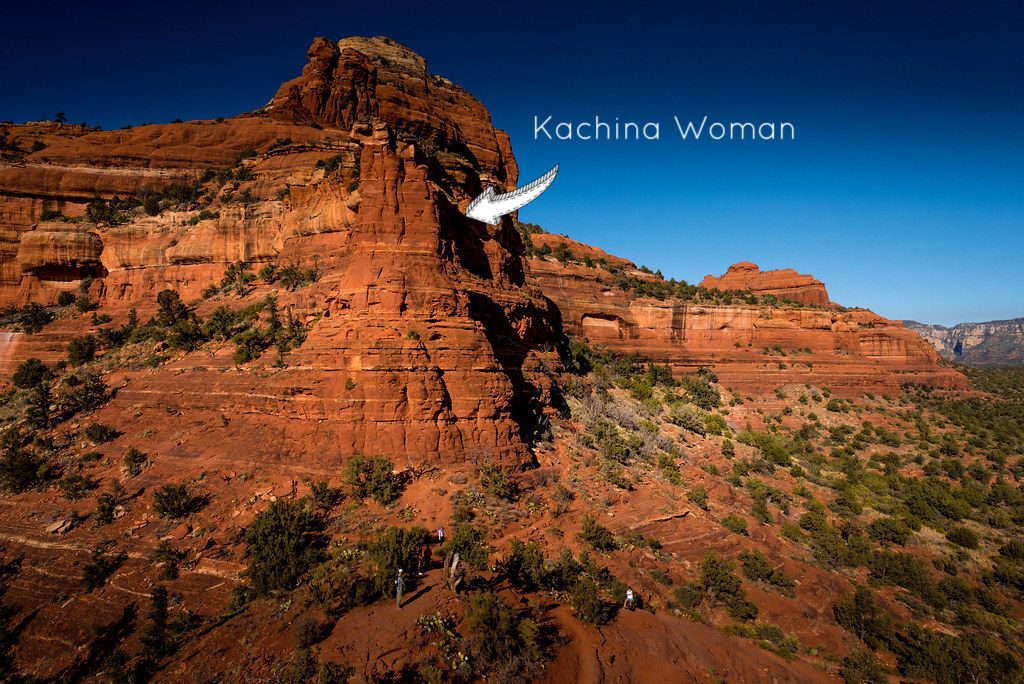 Distance & elevation gain: 1.1 miles out and back.

Trail type: Hiking out and back hard pack dirt and rocky surface with some climbing, 134 ft elevation gain. Bikes not allowed. The Vista Trail dead-ends at the vortex site.

Seasonality: Year-round. Spring and fall are most favorable temperature-wise.